“Man with a movie camera” of 1929 by Dziga Vertov without any doubt is the ultimate definition of cinema, and the gold standard of filmmaking that any other film should be rated by. Ranking any film or making any list of the greatest film is not complete without having seen this film and comparing others with this film that has been made almost 90 years ago. Only “The Battleship Potemkin” by Sergie Eisentein that was made four years earlier could stand above this film, for being an earlier creation, having invented some cinematographic and filming techniques prior to this masterpiece, and also having a story to show. Surprisingly both films are made by two Russian film masters, who defined cinema at its inception. One believing in the medium for telling story and narrative, while conveying ideology and provoking emotions (Eisenstein), whereas the other used the screen to experiment the art and techniques of cinema, camera movements and editing, albeit conveying his poetry (Vertov). 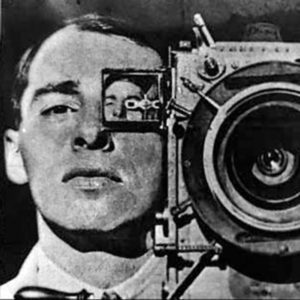 Vertov’s experiences with a simple camera of 1929 has been and will be an invaluable lesson to any camera man or film director, what camera and editing can do. The vast experiences with camera and editing (done by his wife, Elizaveta Svilova) in this documentary film has taken others for many years later to absorb and replicate some of the techniques in their films to this day. This masterpiece of cinema was definitely beyond its time in every frame, technique and content. “Man with a movie camera” should be taught in any schools of filmmaking frame by frame and students need to appreciate how such a grand work came to possibility with a simple camera in 1929. Vertov could not possibly achieve this great work in a feature film content, though his documentary or camera work experience is not without content. The film in fact is the story of urban life of men, women and children in the Soviet cities of Kiev, Kharkov, Moscow and Odessa, at work, play and else. The man with the camera is as well part of the film and story, as he is shown frequently in the film. Therefore the people of Soviet Union, including the cameraman are characters or actors of the film. This masterpiece that perhaps deserves a book to write about, needs an introduction of its creator. Vertov (his pseudonym) born as David Abelevich Kaufman, also known as Denis Kaufman (1896-1954) was not only a pioneer filmmaker, but also a cinema theorist. Vertov first studied music at Bialystok Conservatory, then writing poetry, science fiction and satire. From 1916 to 1917, he studied medicine in Saint Petersburg, while experimenting with sound collages in his free time. He eventually adopted the name “Dziga Vertov”, which translates loosely from Ukrainian as “spinning top”. In his early writings, Vertov emphasizes on the camera lens as his “second eye”, that can perceive and record the nature of individuals, their interrelations with each other, the nature, machinery, and their emotions. After the Russian revolution of 1917, at the age of 22, Vertov began editing for Kino-Nedelya studio and started the Russian first newsreel series in 1918. The Battleship Potemkin directed by the Russian filmmaker, Sergei Eisenstein in 1925, at age 27, portraying the mutiny that occurred in the first defeated Russian revolution of 1905, when the crew of the Russian battleship Potemkin rebelled against their officers.This great silent film that has been voted the best film of all time by many international filmmakers and critics many times from its inception to this day, and influenced many other films in part or in whole, needs an introduction with his creator. Sergei Eisenstein, born in 1898, before filmmaking studied architecture and engineering, then served the red army in the Bolshevik revolution, before starting his career in theatre, creating quite a few plays, then a theatre designer, an art theorist and finally a filmmaker. Two years before making the Battleship Potemkin, in 1923 Eisenstein attempted his first trial in filmmaking with a short film. “Glumov’s diary”, then in the same year of 1925, he made his first feature film of “Strike”. Eisenstein’s filmography continued with other masterpieces such as “October: Ten days that shook the world” in 1927, “Alexander Nevsky” in 1938, “Ivan the terrible” part I and II in 1944 and 1945, and quite a few others in the between years. Eisenstein has written extensively on film theory and editing, such as “Film form: essays in film theory”, “The film sense”, and “Towards a theory of montage” among others.

Eisenstein’s “Alexander Nevsky” after 13 years from “The Battleship Potemkin” and after his extensive travels to Europe and Mexico, proved to the world that he could create great work in the sound films as well, so that the great Russian composer of the time, Sergie Provofiev would write the music for his film, that Eisenstein reciprocated him by designing sets for an operatic rendition of “War and Peace” that Prokofiev was developing. Like the Battleship Potemkin that for years to come, provoked mutinies around the world, in or out of the water, in or out of the film industries, with many copies of mutiny films even in the west, “Alexander Nevsky” warned the world against the German Nazis expansive worldwide infiltrations, a year before the inception of the world war II. Unfortunately Eisenstein died prematurely from a heart attack, even before finishing the third part of the trilogy, “Ivan the terrible” in 1948 at age 50, otherwise the world would witness more masterpieces from this unique filmmaker of all time. This unparalleled life of not only a filmmaker, but a theorist, theatre and stage designer and producer, engineer and architect, could only make such great films such as “The Battleship Potemkin” that after years of censorships around the world by different governments, still is heralded a “the greatest film of all time” and still released and shown on screen, studied piece by piece in the schools of cinema and above all is still heart beating for the new audience who would be mesmerized by the possibility of such production more than 90 years ago!

The Greatest Films of all Time:1.The Battleship Potemkin (1925)(USSR)