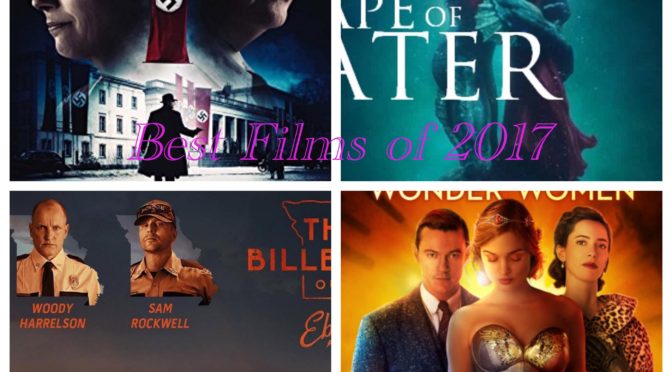 This most recent film of Guillermo del Toro, the Mexican filmmaker, who is a screenwriter and novelist, won the Golden Lion award of the best film at the 74th Venice Film Festival, before winning the best director award at the recent 75th Golden Globe. The story written, scripted, produced and directed by himself, is of a Beauty and the Beast type, while fairy tale, but modern taking place in 1960’s in US. Adapted to some degree from his own previous masterpiece “Pan’s Labyrinth”, the film centers on the universal relationship and understanding between the two beings in nature, here between a cleaning young female at a high-security governmental lab and an “amphibian” locked in for scientific or destruction purposes, or else. While the film gets caught in unrealistic fantasy and kind of fairy tale, and in a common rescue plot of commercial films, with interweaving reality of the time (governmental spy activities in the cold war era), and most importantly with the inner psychological connections of humans with an alien type, has achieved an acceptable achievement in cinema. The film also stands out among a few good beauty and the beast, and also alien type films, such as “E.T” for creating different beautiful, while surprising scenes such as the love making in the bath, flooding the bathroom with water and immersing in, of the two creatures, and more so the real love felt between the two.

This film written, produced and directed by Marin McDonagh, starring Frances McDormand, Woody Harrelson and Sam Rockwell, is original in not in its whole story content or else, but on three billboards that this searching for the criminal story hinges on. The film that has been already the big winner at this year Golden Globe Awards, with winning the best picture, actress, supporting actor and screenplay is the story of a mother, Mildred Hayes (Frances McDormand) in search of her daughter’s rapist and murderer sometime after that the town of Ebbing’s police had failed in discovery. So she come up with the surprising and innovative idea of using the three billboards on the entry to the town that have been obsolete for a while, and posting her message of the police failure in the case. This creates a commotion in the town and on the top the anger of the police, the Chief Bill Willoughby, despite his name is attacked specifically on the billboards, he is a gentle man who according to him, he had tried hard to find the murderer, and now is dying from a terminal cancer and is doing his best to mend the commotion in the town. While the mystery of the murder is not really solved, despite the hunch of the deputy chief who was a bad guy for most of the film, then turns around helping Mildred at the end, the film has a surprise of the Chief Willoughby shooting himself to death, before dying slowly and painfully from his cancer. In brief the film is another murder mystery genre, but with the interesting original and surprising billboards!

This British film by Joe Wright, starring Gary Oldman as Winston Churchill and Kristin Scott Thomas as his wife, is the story of switching prime minister in May of 1940, from Chamberlian to Churchil, and the English government decision to make peace with Nazi Germany or go to war. The film has already been hailed for the great performance by Gary Oldman who won the Golden Globe award. The film clarifies part of the shameful history behind the second world war, such as the peace accord between Germany and US not to intervene and aid Europe, as Roosevelt rejected Churchill’s request for help. Also Chamberalin who first signed the Munich agreement in 1938, conceding the German-speaking Sudetenland region of Czechoslovakia to Germany, but when Nazis invaded Poland, he declared war on Germany on September 3, 1939, failed to put up a strong halt to Nazis ambitions and expansions. He resigned on May 10, 1940 after the Allies retreating from Norway and occupation of France by Germany as both Labour and Liberal parties were not well untied under him, and his associate, Lord Halifax was urged to make peace with Germany again. So the film is mostly a historical depiction of Britain in the difficult days of May 1940 with a superb acting of Gary Oldman, though it has an emotional heart felt moment when Churchill, historically true or not, rides on in the London Metro to meet people and ask their opinion of making peace with Germany.

This great war drama produced by Germany, France and England, directed by the Swiss Vincent Perez, adopted from the 1947 novel “Every man dies alone” by Hans Fallada, is a different and original war genre film. Some films open beautifully, but fall off as the film goes on, some start slow and lame, then warm up later on, but only a few great films stay artfully from the opening to the ending scene, and this film is one of those rare films. The opening scene is a beautiful cinematographic of a forest that then interjects in with a running soldier, who soon was shot, falls off, but his eyes open up to the tall trees and the sky, as if he is still alive. The next scene shows the streets of Berlin, then a mailwoman on a bike, handing a mail to a couple, who we’ll learn later on to carrying the news of their son’s death in the war. For a while the couple quietly swallow their grief, until the father after changing the “Fuhrer”, that in German means “leader” in a book to “Lügner” meaning “liar”, he comes up with the heroic and innovative idea to write post cards, revealing his son’s death and Hitler’s war crime and distribute them all over the city. While the wife initially disagrees as she does not see any point in that changing the path of the war, she joins him and both distribute the cards that they call it “free press” all over Berlin. The film from now on, turns to a detective chase of the card distributor who is criminal in their eyes. All the cards except 18 were handed to the police, that means they were kept by some other opponents to the Nazi’s war machine. At the end the couple were arrested and killed by guillotine without showing the brutality of the scene. The film also beautifully performed by Emma Thompson and Brendan Gleeson, is a rare example of cinematic experiment nowadays at the era of digitalism, and computerized fake special effects. Instead the film exercises the best of camera moves, angles, slow and even almost freeze frames, making the viewer to stay longer with every scene to absorb the depth of the content. The film beautiful and simple musical score adds to its sensation. After a long time finally a different WWII film from inside of the Nazis state, joins the other such greats as the late “The Reader” of 2008, and “Europa Europa” of 1990.

Professor Marston and the Wonder Women***:

It has been long since such a surprise, strange and shocking feature film has been on silver screen. This is film by Angela Robinson who has been filming on homosexual lives, relationships and issues for more than a decade, and starring Luke Evans, Rebecca Hall , Bella Heathcote, and Oliver Platt. The film is about the story life of the psychologist, William Moulton Martson and his wonder women, his wife Elizabeth (Rebecca Hall), and their shared mistress Olive Byrne (Bella Heathcote), and the story of the evolution of “Wonder Woman” comic heroine character. The film based on the true life story of Dr. Marston (1893-1947) and his unconventional “polyamory” or threesome relationship with Elizabeth and Olive, from both he ends up having children, all in very still strict and orthodox American society of late 1930s-1940s. This personal life story that was a total shock to the neighbours and the society at large then, comes to the silver screen that even today could be a surprise and shock for Hollywood so to be ignored by many critics and others so to be reviewed and commented on. Although some extra lesbian relationships between Elizabeh and Olive could have been added to spice up the true life story of professor Marston and some intense masochistic and sadistic sexual scenes to make it repulsive to some, the film still stands out as a heroic filmmaking presented on silver screen to a large audience. This heroic filmmaking has its own faulty interpretation of Marston’s psychological DISC (Dominance, Inducement, Submission, Compliance) theory of humans emotions. Marston who believed humans emotions are reactions to the environment and others based on the favorability and expressed as one of the above behavioural reactions, in the film has been misinterpreted in the form of masochistic submission and compliance, and sadistic dominance and inducement. The Wonder Woman comic character also as a fantasy icon to promote the power of women and feminism in 1930s-1940s has also been misinterpreted to submission and masochism. At any rate, like or dislike, the film is able to provoke thoughts and emotions and be a subject of discussion and argument on the freedom and judgment of any kinds, so worth to watch, as it shows the power of films.