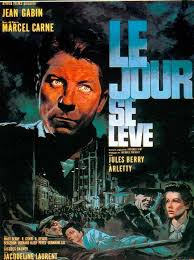 While 1937 boasted with three greatest films of all time, “La Grand illusion”, “Pépé le Moko” and “Snow white and the seven dwarfs”, 1938 could not match so. Despite Sergei Eisenstein’s “Alexander Nevsky”, Alfred Hitchcock’s “The lady vanishes”, and quite a few other films, some on the greatest films lists or awards winners such as “Pygmalion”, “You can’t take it with you”, “Olympia”, and “Jezebel”, none were quite original, technical masterpiece or having had any impact on other films. But a year later in 1939, when the World War II breaks out in Europe, quite a few great films appear on the silver screen that “Le jour se lève” (“Day Break”) is one. This classic needs to be remembered and reviewed once again, particularly since it was not fairly appreciated like its predecessor “Pépé le Moko” both from France, and played by Jean Gabin. While color films were already in trend, the film was made in black and white that added to its thrilling and mystery murder poetic realism impression that was the goal of the film. Marcel Carné, one of the key figure in the poetic realism movement in French cinema, born in Paris, lost his mother when only 5 years old. He started his film career as a film critic and worked for quite a few film magazines until 1933. While he was experimenting on short films by age 25, he assisted a few directors such as René Clair.

Beyond a melodramatic thriller:

The film, in story being a melodramatic thriller, that even as such was an original in the genre, had much more to offer to the audience and to the cinema as a whole for the time and over decades to come. The film simple in the story at the surface with no political content or targeting anyone directly, due to its pure bitter realism was banned a year later after release, in France in 1940 by the Vichy government on the grounds of demoralization. But after the war’s end, the film was shown again to wide acclaim in France, and in 1947 it was again suppressed by RKO Radio Pictures that wanted to remake the film in Hollywood as “The long night”! The company acquired the distribution rights of the French film and sought to buy up and destroy every copy of the film that they could obtain. For a time it was feared that they had been successful and that the film was lost, but it re-appeared in the 1950s and has subsequently stood alongside Marcel Carné’s next masterpiece “Les Enfents du paradis” (Children of Paradise). 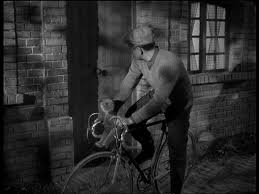 From the opening scene, the camera with its bottom up and down up angle shots show an apartment building, then climbing up of a blind man up the stairs, hearing a shooting, wondering nervously what has happened, while a dead body has already fallen from the winding stairs by his feet. All these opening shot, specially using a blind man as the first witness, but not able to see what has really happened, creates an atmosphere of mystery murder and thrill that was all new in the era. Then the flashback in time to explain the opening scene that is in fact one of the final scenes leading to the shooting and murder, were all innovational and original for the time. The use of freezing and slow frames, the camera staying on the subjects for long so to make the audience think and reflect on the scenes, all have been used artfully and abundantly by Marcel Carné’s, and later on became a technical trademark of the French cinema.

The main protagonist, François, played by Jean Gabin who at the opening scene has shot and killed another man, a magician and con artist, Valentin, has barricaded himself in his apartment, while the curious crowd and the police in large numbers encircling the building. This scene is a prototype of so many later familiar scenes in many future films of encircling and barricading a suspect by the police force. François in his apartment seems puzzled himself as the shooting has been an accident and him not really a killer. He quietly without uttering a word, walks around, lights his cigarette and stares at himself in the mirror in the room, all in puzzle and perhaps regret. We as the audience do not know yet what has led to the shooting, so the film makes the audience active participants to guess and make their own scenario.

Use of a large squadron of the police that later on becomes a trademark of French Cinema and applied by other cinemas later on, shooting aimlessly at the apartment without yet having a proof of the crime of the barricaded man is a prototype in the crime and thriller genre. While looking through his apartment building window, bullets holed by the police moments before, François staring into the far, takes us back to his memories of the events led to the current time, in an original flashback shot. The sudden switch from the quiet scene in the apartment through the flashback to a noisy and loud factory where Francois work, calls the viewers full attention to learn the beginning chapter of the story. A beautiful young woman, Françoise played by Jacqueline Laurent walking into the factory with a banquet of white flowers in her arms, quietly looking around then eye to eye with working François in all that noise, is a contrast of the nature, the beauty, perhaps love and affection needed much for this rough and non-environmentally friendly industrial place. Then the scene of the evening when Francois riding his bike to his lover’s house looks like he is riding in a classic painted frame of a French town alleys.

The film was Macrel Carne’s fourth collaboration with the screenwriter and poet, Jacques Prevert and their third entry in the poetic cinema movement. Poetic realism’s bleak outlook reflected the waning of popular front idealism as fascism began to spread throughout Europe. Although Carne’s film was not political in content, it depicts the poor working class, François, Françoise, and Clara Played by Arletty who is slaved and used by Vaelntin, and the watching crowd outside the apartment building.  The film, an example of a commercial film with no clear political message, but in the right realistic context, hard to be missed from an intelligent eye, soared enough of opposition by the official fascist and rightist government to be banned across Europe at the verge of one of the ruthless wars of all time. Of importance in the influential creation of the film, was Alexandre Trauner, the production and set designer who constructed such realistic and working class milieu that became a classic example for adaptation by international films for years to come. It was Trauner’s design to make the François’ room with no movable walls, but tight, claustrophobic, inescapable, vividly threatening and helpless, that made a frontier for films stuck in a four walls such as some of Hitchcock’s. Jean Gabin, the most popular French actor of 30’s and 40’s, with his simple masculinity without innocence and ignorance, but convincing so being empathized by the audience, starts a style of acting in cinema that is seen later on in Humphrey Bogart, Henry Fonda and to the present time, Daniel Day Lewis. 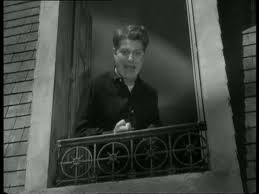 Compared to many later on thrillers, the film does not contain much of action, but many dialogues, yet unlike many overwhelming talking films, it is not boring, and maintains the thrill and adds content with its poetic and as a matter of fact simple philosophy of life. The dialogue between François and Françoise: “What are you thinking when you kiss me?’; “It is so quiet, as the whole world have died and we are the only alive”; “The lovers live longer”; “You’re like my teddy bear with one eye happy, the other one sad”; “When I can afford, I will buy you a bike to go when the weather is nice like in Easter to pick some lillacs.”; and François to the watching crowd outside “A killer?, now you have something to gossip about”; “Sure, I’m a killer, but the killers are everywhere. Everyone kills”; “They just do it quietly, so you don’t see”; “I slave all day long, the clock rings, I’m up to work, then come home and sleep until rings again to wake up to work”; and the other factual side of life by Valentin “Women don’t love me, but find me attractive”. Despite being full of poetic and simple life matters philosophy on a backdrop of working class milieu against the system and the law, a major essential part of the film runs only with François in his room in silence. It is a rare cinematic occasion for the era, a man struggling inside and out with what has changed his destiny by a fatal accident. To convey the pointless meaning of life and love without any dialogue, there are flashbacks to the past to retell the story, then there is restlessness wondering of François in the room, his chain smoking, his deep immersion in his unspoken thoughts, his reflection in the mirror, holding the stuffed teddy bear taken from his lover Françoise as a piece of her for memory,… Then there is François’ protest at the crowd who surprisingly are on his side, supporting him and recognize him as a good and ordinary man like themselves. The scene has been adapted in a few future films such as “Network” and “Dog day afternoon” of Sidney Lumet and more. All these psychology depictions were possible by using the space and objects or props wisely. The rest of psychology of the film is seen in the dialogues and in the love web that François is trapped between Françoise and Clara, weaved dangerously by the petite bourgeois Valentin and the capitalist circumstances. The subjects of love, lust, jealousy, rivalry, life, death, killing, sadness, happiness, helplessness, hopelessness, hope,…all are discussed and shown in a thriller film unexpectedly. When Valentin breaks the news to François “Françoise is my daughter” though she later on denies it, is a partial adaptation of similar content in “Chinatown” of Roman Polanski. The fighting scene when François is pushing Valentin down the window of his apartment, with its narrow top-down angle of camera is quite thrilling and a reminder of the future films’ adaptation such as “Vertigo” of Hitchcock, where Valentin even mentions “dizzy spells” that he got after the struggle. And the final scene before the police throwing tear gas into his room to arrest him, François shoots himself as he finds no end to his misery, that shocks and disappoints the audience of the time who are not used to such realistic ending and do not wish their hero to die at the end! In closing remarks “Le jour se lève” one more time will be redefined based on the following criteria: