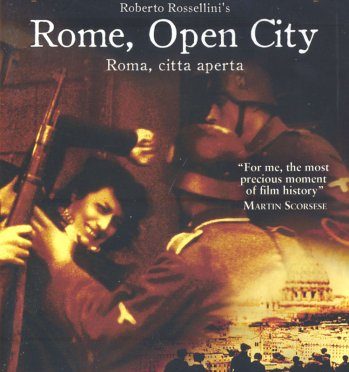 “Rome, Open City” of Roberto Rossellini was shot in August 1944, just two months after the allies forced Nazi Germany to withdraw from the city of Rome. The title refers to the occupation of Rome by Nazis and its declaration of being an open city, meaning a city giving up all its defenses to total surrender for prevention of further damage by bombings and attacks. Rossellini who was basically trained as a documentary filmmaker was financed by a wealthy elderly lady to make a film on Don Pieto Morosini, a catholic priest who was shot by the Germans for assisting the resistance movement in Rome. Later on the same lady agreed to finance an additional documentary about children in Rome at the time of occupation who were strong part of the resistance movement. When Rossellini asked his friend Federico Fellini to get him the actor Aldo Fabrizi to play the role of the priest and also assisting him to write the screenplay of the film, Fellini suggested to combine the two documentary to a feature, so “Rome, Open City” was created. 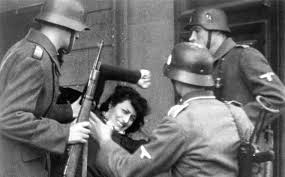 Before discussing the film further, its creator, Roberto Rossellini deserves a brief introduction. Rossellini and both his parents were from Rome, so they knew the city very well. His father who was in construction built the first cinema in Rome, the “Barberini”, so Roberto could have unlimited free pass that he took the advantage from an early age. When his father died, he worked as a soundmaker for films and for a certain time he experienced all the ancillary jobs related to the creation of a film, gaining competence in each field, while his brother, Renzo later scored many of his films, including “Rome, Open City”. Rossellini in most of his films preferred ordinary non-actors than professionals, so to remain more true to the reality of the feature, he strived to depict. Enough of Rossellini’s great neo-realistic work and influence, that in 1948, Ingrid Bergman wrote to him if he could use her in his films that was the start of a long-term work and personal relationship ending in marriage, that lasted only seven years. Again to his credit, Rossellini was invited by Jawaharlal Nehro, the prime minister of India at the time, in 1957 to make a documentary about India and improve the Indian films industry. Six years before his death, in 1973 Rossellini was invited by Rice University in Huston, Texas to help establish a media center, working with the professor, Donald Clayton. Finally three years before his death in 1973, he was invited by Yale University to teach cinema, that he taught one semester on “The Essential Image”.

The Frontier of Neo-Realism:

“Rome, Open City” opened the Italian and the world cinema to a new kind of film style and language, later on called “Neo-Realism” with many later on masterpieces such as “The Bicycle thief” and “Umberto D”. The characteristics of such new style that gave cinema intense power, were depicting harsh and bitter, but at the same simple realities of life, shot in real scenes, on the streets, in real homes, with real people (mostly non-actors), and with children having a major parts in. That all started with “Rome, Open City” that is while a documentary, it is a narrative feature film, with melodrama, great screenplay reciting the real events, superb acting, unique camera work and cinematography and above all a perfect direction. 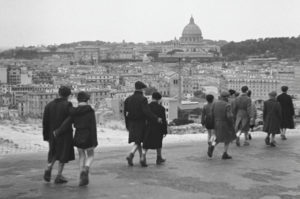 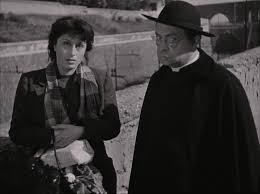 The film is a story of a nation, ordinary people, including men, women, children and even priests who are all suffering under fascism and Nazi occupation, and also their resistance and fighting. There is no line separating these people for the common cause of ending the occupation and grasping the freedom. So children, women and even the priest, Don Pietro (played superbly by Aldo Fabrizi) helping the fighters who some are communists and non-believers in religion. The story is one of many that happened in real life situation in Rome at the time of Nazi occupation. Giorgio Manfredi (played by Marcello Pagliero) is a communist and resistance leader who’s under prosecution by Nazis, is protected and given refuge by the whole city, including his comrade Francesco (played by Francesco Granjacquet) and his fiancée, Pina (played as it could be played only by Anna Magnani). Children who are all non-actors have a major part in the film as they had in the real Rome at the time of occupation, helping the resistance.

The film that is hailed by Martin Scorsese as “The most precious moment of film history” and by Jean Luc Godard as “All the roads lead to ‘Rome, open city’!” change the style of cinema for ever. It’s as realistic, as unexpected, as non-cliché as it can get. The heroes since are real, they die as in real life and as it happened in Rome at the time of occupation in the second world war. First Pina running after the German army truck that is taking Giorgio away, gets shot and dies in the arms of the priest Don Pietro. Then in an original scene, Giorgio is tortured to death when the Nazis could not force the priest to talk and give him away. Here in anger and disgust, Don Pietro tells the Germans that you killed his body, but not his soul! Here the religion and the communism stand together at the service of resistance to enemy on the path of national freedom. Finally the priest Don Pietro is not exempted from death by the fire squadron who refuse to shoot him as Italian soldiers, so he will be killed by the German officer, while the observing children whistle in the background. 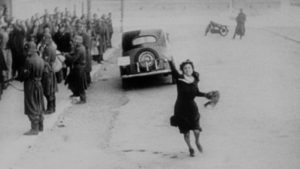 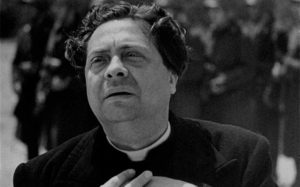 “Rome, Open City” as the frontier of neo-realism in cinema, not just in Italy as it was called so, but worldwide, has set the foundation of similar films for years to come, not just for the entertainment, but for influencing the audience, showing the great power that cinema could have on people, with a great part in the history. 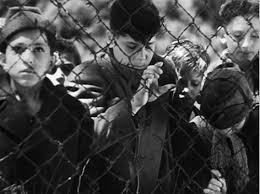 In closing remarks “Rome, Open City” one more time will be redefined based on the following criteria: