“Roman Holiday” is perhaps the best example of a popular or commercial film that borders with the film as an art medium. The simplicity and tenderness of the film reminds us of “The Bicycle Thieves”, but in a fairy tale drama and comedy. “Roman Holiday” is also perhaps the first modern fairy tale of a royal princess getting bored and suffocated of royal life, escaping to the reality of everyday of common people, who themselves may not appreciate their simple happiness. The film is also one of the first not to be about two lover characters on quite different sides of life, but about an eternal city, Rome in modern time, after the destruction of the world war II. Finally the film is the first major feature for Audrey Hepburn, an unknown actress until then, who brought a simple beauty and a gentle character on and off the screen to the cinema and deservedly won the best acting academy award. As the crown princess Ann meets the commoner journalist Joe Bradley, the art film meets the common/popular film. The film written basically by Dalton Trumbo, who was not credited until a few decades later, for being blacklisted as a communist and in jail at the time, was William Wyler’s first major achievement since “The best of our lives” in 1946. The film looks like being shot spontaneously or by improvisation when takes us along with the princess and the journalist around Rome. This is as documentary and honest as “The bicycle thieves” was. At the same time the film does not boast and pour on the screen, claiming to be anything beyond an ordinary film for the pleasure of the audience. In this manner, the film unwantedly gets close to Chaplin’s films that are first for the people then for the consideration of cinematic art. Perhaps that’s the reason the film to this day has not been much credited by the critics and the film experts, though they may similarly like and enjoy it as any commoner. 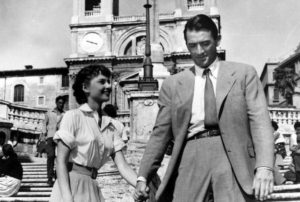 While the film could easily be shot in Technicolor that had been already the trend of the early 50’s, it was shot in black and white, and yet was not short of any of its gentleness, fun, joy, laughter and tears that conveyed. Thanks to William Wyler who finally picked Audrey Hepburn and not Elizabeth Taylor and Gregory Peck and not Carey Grant, the couple on the screen matched so much that to this day, no one else could be imagined to play the roles but them. “Roman Holiday” is the first classic to differentiate cinema from other work of arts, specially in story telling such as the literature. While a literary work is not read by many ordinary people and so has to stick to its high standards, a film is not necessarily bound by that, as it is an art medium for everyone, specially the commoners. And “Roman Holiday” is a rare film to achieve that. Finally the film for all the simplicity, honesty, joy and laughter that gives the audience, is not the type of film to talk, write and critic much about, but to watch and enjoy.

In closing remarks “Roman Holiday” one more time will be redefined based on the following criteria: 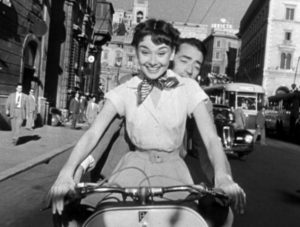