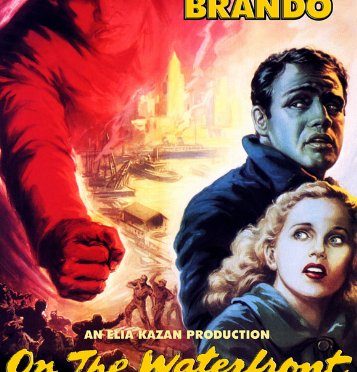 “On the Waterfront” is the second major film of Elia Kazan with Marlon Brando and Karl Malden, since their first endeavor, “A Streetcar named Desire”, but this time with a fuller cast including Rod Steiger, Lee J. Cobb, and introducing Eva Marie Saint. Elia Kazan starting on Broadway introduced Marlon Brando with their first cooperation on the screen, and again this time with a full power house of cast, stamped his influence for long years to come on American and the world cinema. As a theatrical director, he brought the art of theatrical acting or method acting to the cinema, emphasized on the role and power of acting on screen and established the actors studio as a theoretical back up. This while took away the important visual component of the art of filmmaking, enriched cinema with the art and significance of script and acting that were ignored or were not known to this extend before. Elia Kazan style or the acting cinema, put the scenario and the acting at the centerpiece of the films, popularized it and conceived a new era of Hollywood as the world of actors. This style was very dominant for decades until it lost some power to the influence of special effects and digitalism in cinema in later years. In these types of cinematic works, such as “On the Waterfront” there is less influence of camera work and art directing, but acting and acting directing. In Kazan’s work, the actors have lots of freedom in acting their own ways and improvise as there quite a few of such scenes in this film, like his others. Many actors liked to work with Kazan and called him the best actors director and Marlon Brando expressed about him “He was an arch-manipulator of actors’ feelings, and he was extraordinarily talented; perhaps we will never see his like again.” 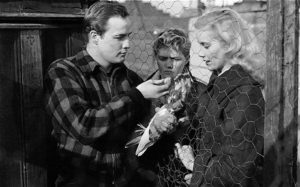 “On the Waterfront” as a powerful socialist workers movement film and a big surprise for Hollywood at the time of McCarthy’s communist witch hunt, is also a mark of ambivalence on and off the screen. On the screen, Terry (Marlon Brando) an ex-prizefighter had been robbed off his career by his older educated brother, Charley (Rod Steiger) who’s the brain of the mobs, headed by the trade unionist, Johnny (Lee J. Cobb) to betting at the interest of the mobs. Terry, a victim of his surrounding and his own laziness and lack of intellect, associates in the murder of a friend, Joey by the mobs, the brother of Edie (Eva Marie Saint) whom he falls in love with and walks on the path of redemption. Off the screen, Elia Kazan, a socialist in the theatre before joining Hollywood and even in this film, through inquisition and force of the anti-communist committee before making the film, betrays his comrades by revealing some names including his own famous writer friend, Arthur Miller, who even started writing the first draft of the script.

On the Waterfront: A Revolutionary Tale of Redemption

The film was based on a series of article titled “Crime on the Waterfront” by Malcolm Johnson published in 1948 in the New York Sun that won the 1949 Pulitzer Prize. The screenplay that was first drafted by famous American writer and playwright Arthur Miller, later on was written by Budd Schulberg as an original story. The film received 12 Academy Award nominations, winning 8 for the best picture, best screenplay, best actor for Marlon Brando, best supporting actress for Eva Marie Saint, best art direction and set decoration for Richard Day, best cinematography for Boris Kaufman, best film editing for Gene Milford, and best director for Elia Kazan. But the great and original score of Leonard Bernstein that was nominated lost to Dimitri Tiomkin for “The High and the Mighty”. The film was also ranked 8thin the first edition of AFI’s greatest American films of all time in 1997, and 19thin the second edition in 2007. 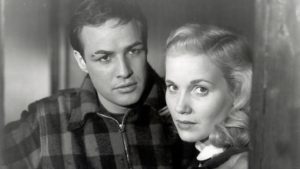 The story and the film about the waterfront in New Jersey union Corruption and crimes in control of the mobs, is a revolutionary story of redemption. Revolutionary , original and surprising for a Hollywood film as even the previous socialist works of John Ford, “Grapes of Wrath” and “How green was my valley” were not about the current time when the films were made. The film was “Spartacus” of the modern time, calling for uprising against slavery and injustice. Even the priest father Barry (Karl Malden) is a socialist that Waterfront is his church is a major force behind the workers uprising. The film is about redemption of Terry (Marlon Brando) who has been an associate in the mob crimes forced by his brother, Charley (Rod Steiger) the right hand of the mobs boss, Johnny Friendly (Lee J. Cobb). When he arranges the murder of his friend Joey, and later on falls in love with his sister, Edie (Eva Marie Saint), his internal turmoil of ambivalence and guilt begins a process of redemption seeking. His eyes and heart have opened by love and the realization of his wrongdoing, leading him to break through and joining the right side against his brother and the mobs. After another deliberate murder of another worker on the dock, he fist fights with Johnny on the waterfront in front of all the workers ready to start a working day. While winning the fight that is promising for the workers and their uprising, all the mobs joining Johnny and beat him up badly to the ground. While no other workers dare to rescue Terry, the father Barry and Edie arrive to the scene, lift him up and encourage him to finish what he has started and lead the workers to work, this time running by their own union and not the mobs. He does so while completely bruised and beaten, limping and walking off balance, followed by all the workers entering the gate of the dock to work on their own free of mobs control, hence concluding their victory and the end of the film.

The film is also a redemption call of the director, Elia Kazan who two years earlier named eight former communists in the film industry to the House committee on un-American activities in 1952. Arthur Miller, the friend of Kazan who wrote the initial draft of the film, entitled it “The Hook” that was refused by Harry Cohn at Columbia Pictures as he suggested to change the mobs to communists as elements of corruption in the waterfront workers union, that Miller never agreed. Later on with the help of Budd Schulberg who rewrote the script and kept it all as it had happened in the real life of the waterfront in New Jersey, the script was taken to Sam Spiegel, an independent producer who worked with them and produced the film. Kazan in seeking redemption for his action two years earlier did not let Spiegel to change much of the story and put the film on the screen to the surprise of Hollywood, but the accolade of the public and critics, sweeping eight awards at the Oscar, as nobody wanted to be on the dark side of the injustice. 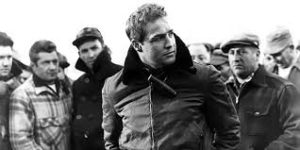 “On the Waterfront” that hinges heavily on the power of acting and is a great such example, may not have been as such if the role of Terry had been given to Frank Sinatra per original suggestion of the producer and if Kazan would not have insisted on Marlon Brando. The role of Edie who was originally turned down by Grace Kelly who preferred to play in Hitchcock’s “Rear Window” was finally given to Eva Marie Saint who won the best supporting actress award at the Oscar (ironically she was the only principal actress in the film), while Kelly won the best actress award for another film, “The Country Girl”. Rod Steiger who was ironically a year younger than Brando, played as his older brother in the film and won the best supporting role at the Academy Awards.  “On the Waterfront” is a force major of acting and music score, though its cinematography, directing and else were not exceptional. In closing remarks “On the Waterfront” one more time will be redefined based on the following criteria: