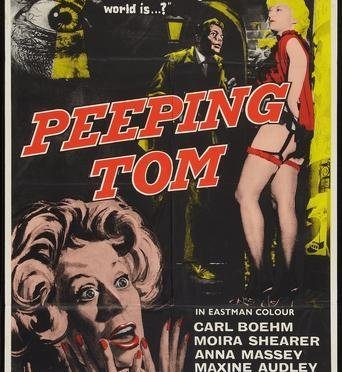 While Hitchcock’s “Psycho” released in September of 1960 in US, and was hailed by many as a prototype of all horror films, in April of the same year another British filmmaker, Michael Powel released his masterpiece “Peeping Tom” in England. “Psycho” threw off a few critics such as Bosley Crowther of The New York Times for Hitchcock’s sleazy work (though his Psycho was more matured than “Rear Window” and “Vertigo”, wonder how they were over-rated”). “Psycho” also offended the British critic C.A. Lejeune who permanently left The Observer as a film critic. But the negative impact of “Peeping Tom” specially by the critics at the time for its horror, violence and sexual content was so huge that ended Powel’s career in England.

Michael Powel who wrote and directed films from 1930’s mostly on the subjects of wars, opera and Ballet, and hailed and awarded by many agencies around the world, perhaps shocked almost all for “Peeping Tom” that was out of his work league and insulting to many moralistic critics. “The Life and Death of Colonel Blimp” of his that is ranking 34 of the greatest films of all time in our list, are followed by several other great films of his in collaboration with Emeric Pressburger, such as “49thParallel” and “One or Our Aircraft is Missing” all the three films surprisingly in the same year of 1943, “A Matter of Life and Death” and “The Red Shoes” both in 1948, “The Tales of Hoffmann” in 1951, “The Battle of the River Plate” in 1957, “Luna de Miel” in 1959 all the recognized and awarded films across the globe.

It took more than two decades until 1981 that BAFTA (The British Academy of Films and Television Awards) forgave him for “Peeping Tom” and awarded him a fellow of the academy. This recognition now that the world of cinema had softened their moral judgments and many similar horror and anti-moral films all over the world had been made and released, followed by other agencies such as a career award of Gold Lion by the Venice Film Festival in 1982, a fellowship award by the British Film Institute (BFI) in 1983, a Honorary Doctorate Award by the Royal College of Art in 1987, Akira Kurosawa Award from San Francisco International Film Festival in 1987, and finally in recent years an English Heritage Blue Plaque in 2014.

A few great filmmakers such as Martin Scorsese and Francis Ford Coppola from the beginning recognized the genius of Michael Powell and his films, admitted his influence on their works, and “Peeping Tom” did not throw them off. Indeed Martin Scorsese has considered the film along with 81/2 of Federico Fellini as the only two films one could say about filmmaking and it painstaking process: “I have always felt that Peeping Tom and 8½ say everything that can be said about film-making, about the process of dealing with film, the objectivity and subjectivity of it and the confusion between the two. 8½ captures the glamour and enjoyment of film-making, while Peeping Tom shows the aggression of it, how the camera violates… From studying them you can discover everything about people who make films, or at least people who express themselves through films.”

The problem still to this day in appraisal, critic, awarding or disregarding a film is heavily based on the content of the film, that if pleases and of the trend of the time, would be approval and hail otherwise disapproval and disgust. That’s what exactly happened in 1960 to “Peeping Tom” and Michael Powel who could have created more great films if not judged moralistically. In fact the film portrays an example story of a serial killer and voyeuorist who can exist anywhere and at any time. But the film goes beyond telling and showing such story graphically just to frighten people for box office purposes like “Psycho”. The film analyses the character of Mark Lewis (Carl Boehm) beyond his present killing obsession, probing to his past and discovering his own subject of a victim of abuse by his psychologist father from early childhood.

His father studying “Fear” in him by frightening him in different ways such as throwing a lizard in his bed and filming his reactions, exactly like what he is doing in his adult life, filming his female victims before and after killing them. Powell with his genius of filmmaking that had been established all over the world with his previous great works, and with the assistance of his cinematographer, Otto Heller and the score of Brian Easdale creates such a celluloid milieu that’s a shocking, analyzing and understanding experience rarely seen in cinema.

The film is seen through the camera of Mark most of the time that was an invention and originality at the time. Mark who works as a camera assistant in a film studio and as part-time photographs soft-porn female photos above a newsstand shop for sales in the shop and other similar places, re-experiencing his own childhood filming by videoing his female victims while letting them to watch their own torture and death. His subject like his scientist father whose books on Fear, Mark still has kept in his home studio is also “Fear”. The fear is also evident on his own face parallel to the frightened looks of the victim. He films throughout the process of killing and aftermath even the police investigation and carrying the victims by ambulance to the morgues.

Mark is an ordinary looking young man unlike many other serial killers in later films such as Hannibal in “Silence of the lambs”. He is a lonely and reclusive, but handsome man that a young girl in his apartment building, Helen (Anna Massey) finally gets attracted to him, and takes him out of his seclusion. He falls in love with her and gradually confides with him about his childhood and his mental abuse by his father, seeding a life long fear in him. While their romantic relationship is going on, Mark continues with his killing spree, killing an extra lady on the film studio stage where he works one night and puts her body in a blue luggage, that is opened during the filming of a movie the next day by the female protagonist, frightening all on the stage. This second murder of his showing in the film, is again filmed by him throughout including the whole process of police investigation. All present on the stage are held and interrogated by the detectives, and Mark even asks the inspector to video him during his own interrogation.

Helen later on takes Mark to her flat where she introduces him to his blind and alcoholic mother (Maxine Audley) who swiftly suspects him not being normal and struggling with something from his past. One night she sneaks into his apartment studio while he is re-viewing one of his murder films. After a conversation and trying to figure him out, she examines his face by touch, and he asks if she pictures him that she responds affirmatively. Then she asks what bothers him while he walks away, but she says that he has to tell somebody. Back to the film studio stage, Mark asks a psychiatrist who has been called there to console the upset female star of the film from having viewed the dead body in the luggage, if he knew his father. Then he asks  about voyeurism that raises the psychiatrist’s suspicion who tells one of the inspector on the scene who sends an undercover agent to follow him how he spends his spare time after work.

The same day when is chased, he decides to murder the porn model, Milly  (Pamela Green) up above the newsstand shop in the photo studio. Meanwhile Helen enters his apartment thinking he is home, and out of curiosity turns on his film projector to view the film reel on, that to her shocking surprise seeing one of his last murder on the film. While running away in disgust and fear, Marks enters in and discloses to her of his obsessive crimes. He further explains to her the root of his fear from his father psychological experience on him in his boyhood, and plays the tapes of his screams as a boy during the experiments. In the final scene he stabs himself in the throat with a blade hidden in his camera’s tripod while watching his own death through an attached mirror, like the way he murdered his victims while watching their death. The film ends with him uttering his final words “I’m glad, it ended this way”.

While in its time of release in 1960, the film was attacked around the world  by the critics and sensor agencies and had to be viewed underground in cult groups, a couple of decades later started to be hailed by many. Powel himself whose career was slashed by others moral judgment surprisingly commented “I make a film that nobody wants to see and then, thirty years later, everybody has either seen it or wants to see it”. The film was initially judged at face value and moralism, by many perhaps not willing to admit some of the bitter realities of the film in their own societies, such as voyeurism, porn collecting and watching, and more importantly the parental abuse of some children, or avoiding analysis of murders and killers. Thanks to Martin Scorsese and others, the film is now on many greatest films list such as the 24thgreatest British Film of all time in the Total Film magazine, and Time Out magazine as the 27thbest British film ever.

In closing remarks “Peeping Tom” one more time will be redefined based on the following criteria:

2. Technicality:The technicality of “Peeping Tom” is in its plot design and development, camera work, cinematography and in the exceptional performance of Carl Boehm as Mark, an Austrian-German actor, a known philanthropist quite opposite to his role in the film.

3. Impact Factor:The influence of “Peeping Tom” has been on quite a few great filmmakers such as Martin Scorsese, Francis Ford Coppola, and many other future horror and serial killers films, though with no deep analysis of the murder and the killer like this original.

4. Survival:“Peeping Tom” has survived well and even better than its initial release so that it has become a model of not just technical filming, but its heroic unconventional filming and release against all the odds.