“Close encounters of the third kind” had only a brief encounter with aliens in person at the end of the film. With “E.T.”, Spielberg brought us a closer, more personal and ongoing encounter experience with the possible living creatures of other planets. E.T. is an alien child who’s left behind by a UFO’s landed on the earth. Like his first science fiction film there’s a family and children encounter with E.T. This creates a more honest and pure encounter experience of humans with a possible alien. In this encounter there is only curiosity and warm-hearted connection and understanding, and no fear, defensive or aggressive reactions of humans toward an out of space being. This is more or less like the reactions of children to an animal or pet. From the first encounter between a 10 year old boy Elliott and E.T., there’s an interconnection despite the language barrier. While Elliott and his siblings who later on when find out about E.T., are protective of him, a group of adults and the governmental agencies who have witnessed the landing of the UFO are in the search to capture and lock up E.T. So beyond another science fiction and aliens’ encounter story , E.T. is an exploration of pure and honest humans’ encounter experience without any mean or defensive intention of an adult world. Due to the involvement of children with E.T., there’s element of magic and fantasy away from the strict world of adults. So with this film Spielberg was able to experience and capture the hearts of the children of the world, as the film belongs to the children more than adults. Elliott, his brother and sister trust each other but not even their mother in revealing E.T. They are protective of him and try to communicate with him and succeed.

The film is the base of many other future films where the children in similar situations protect and save aliens or animals from the grown ups.

Like his first film there’s also an element of spirituality and special senses like the sixth sense in this film of Spielberg. There’s a remote connection and experiencing the same feelings between E.T. and Elliott while E.T. at the house nosing around, drinking beer and get drunk, and Elliott in the school feels the intoxication and gets dizzy. The same when E.T. watching the film “The Quiet Man” on TV and John Wayne kisses Maureen O’Hara, Elliott pulls a classmate girl towards him in the same manner and kisses her. Elliott riding E.T. on his bike and flying is one of the most magical moments in the cinematic history. The flying bike passing in front of the blue moon is another memorable and beautiful cinematic moments on the screen. E.T. trying to contact his home by a makeshift communicator that he has invented and his famous quote of “E.T. phone home” is also one of the most memorable quotes in cinema. Touching Eliot’s tear drop falling off his face when he feels for E.T. who’s missing home is another pure emotional moments between the two different creatures. Losing E.T. in the forest and looking for him by the children brings on thrill and action to the film. When the government agents finally start searching Eliot’s house looking for E.T., the protective children plan to save and arrange his escape back to his home planet. The home sick E.T. is already physically sick as well, totally pale and dying. While Elliott and his siblings were living with E.T. all this time with no masks and safety protective measures, the government agents come in all wearing masks and taking exaggerated measures of safety protection. When one of the government agent asks Eliott what they can do to help E.T., he simply responds to let him go back home. After a seemingly death of E.T and failing of the medical team to rescue him, Eliott is left for a few last minutes with him alone, that after feeling Elliott’s pure emotions, E.T. surprisingly comes back to life and repeats “E.T. phone home”!

Finally Eliott and his brother steal the van where E.T. has been loaded in it inside a box, and drive him away. Arriving at a park where they have already arranged with their friends to bring their bikes to assist in the rescue of E.T., another final bikes flying up in the sky ensues to skip the police roadblock. At the end of the film, the spaceship lands on the top of a hill in the forest where the boys take E.T. back to his people and he leaves the earth and his earthly little friends in an emotional warm but sad farewell. Lastly tears also rolling down on the face of E.T., and he takes with him the pot of earthly flower that was previously withered when he was sick and now back to blooms, as a memory of his visit to earth.

Other than E.T. as the centerpiece of the film as an alien, this science fiction film is more a fantasy film like “Peter Pan”, with magical power. The film also centers on the interconnection of humans and aliens, here children who are more pure and honest with the possible aliens from other planets. What E.T. does and feels, being felt by Elliott and when sick, he would become sick as well and also the follower withers with him and coming back to life with E.T. are all the magical elements of the film that Spielberg already introduced with “Close encounter of the third kind”. E.T. after release was a sudden box office hit and even surpassed “Star Wars” as the highest grossing film of all time, a record that held for 11 years until “Jurassic Park” another fantasy and science fiction film of Spielberg. Hailed as the greatest science fiction of all time by “Rotten Tomatoes” and others, the film was liked mostly for touching the hearts of children and their families. Design of E.T. by the Italian special effects artist, Carlo Rambaldi and the script written by Melissa Mathison helped the raw idea of “imaginary childhood friend” of Spielberg as he claimed, to mature on the screen. But there is an allegation of plagiarism by the Indian filmmaker, Satyajit Ray whose 1967 script of “Alien” that never went to production was a source of imitation by Spielberg in making E.T. True or not Satyajit decided not to sue Spielberg as he appreciated him as a good filmmaker and perhaps liked E.T.

The cinematography of Allen Daviau, specially flying bikes across the blue moon is one of the beautiful cinematic moments on the screen. The music of John Williams applying several instruments and also the technique of “polytonality”, playing two different keys simultaneously created a magical, mystic and childish theme to fit the story content of the film. Despite a universal accolade by critics, the film lost the best picture and directing awards to “Gandhi” but won the best original score and best visual effects awards and two more technical ones. The film was ranked number 25 greatest American film of all time in the AFI first edition in 1998 and 24 in its 2007 second edition list. 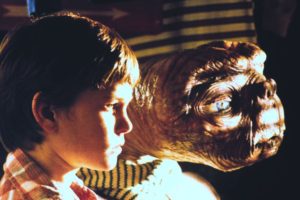 In closing remarks “E.T.” one more time will be redefined based on the following criteria: