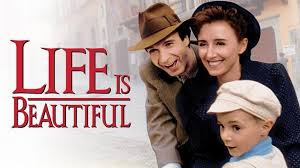 Roberto Benigni, an Italian comedy actor and filmmaker with his “Life is Beautiful” in 1997 that was released almost a year later than Italy in US, proved to be a genius like his master Charlie Chaplin. Naturally a born comedian in his masterpiece, he uses humor and irony to tell a story of love, sacrifice and inhumanity of Nazis in the World war II to enlighten his own nation whose fascist government of Mussolini was on the devil axis and a partner in the big crime. Despite the universal accolade of the film by critics and the public worldwide, there were a few who did not understand the film and its impact on the Italian mentality then and later in recognition of the atrocities of the fascists and Nazis on Jews even in their native country, ending in over 7,000 loss of lives. 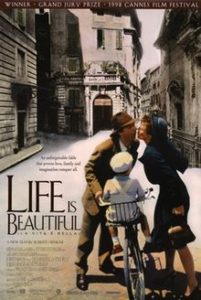 In fact Benigni was smart to consult, from the start of the film and even writing the script, with the Jewish-Italian historian and scholar, Marcello Pezzetti who had travelled over 250 times to Auschwitz and interviewed hundreds of holocaust survivors over the years. He even attended with Pezzetti a full-immersion holocaust history course to acquire more knowledge of the most tragic inhumanity incident of our modern time. Benigni had also one of the real holocaust survivor, Rubino Romeo Salmoni whose memoir “In the End, I Beat Hitler” was a main inspiration for the film, on the set as another consultant. As in the film that Guido (Roberto Benigni) who sacrifices his own life for the survival of his young son Giosue or Joshua (Giorgio Cantarini), Benigni preferred that ending opposed to the death of his son per Pezzetti’s suggestion.

Life is or was Beautiful:

While half of the film is a love story with an uninterrupted comic moments created solely by Benigni himself who like Chaplin not just acted, but directed and co-wrote the script, is a beautiful funny story of love, the second half is tragic, with still ongoing comic moments for the survival in the concentration camp. So the beautiful life of two lovers that produced a beautiful boy before the Nazis occupation of Italy after the country surrender to the allies in 1943, is lost to the racial discrimination and ends in a concentration camp. For the survival of the spirit and life of his little son, Guido continues with his magical and fantasy story making to convince him believing the camp is a contest for the hardest working participant (his father) to collect one thousand points to win a tank. At the end Guiod sacrifices his own life to rescue his son, hiding him in a safe outside to just come out the next morning when all are gone to see his prize tank.

Arriving with his friend to the small town of Arezzo in Tuscany to work in his uncle’s restaurant until he applies for a permit to open a bookstore, Guido runs into Dora (Nicoletta Braschi, Benigni’s real wife) whom he falls in love right away. With constant comic actions and well written and acted script mostly by one man, Benigni as Guido, he runs a few more times accidentally to Dora whom he calls her princess. Meanwhile he waits a German doctor who’s obsessed with riddles and soon interested in Guido who solves his riddles easily and gave him hard ones to solve. He also serves lunch once to an inspector who’s visiting the school where Dora teaches, so he takes the opportunity to pretend to be the inspector, arriving to the school wearing an Italian flag. In one of the funniest scenes of the film, when he is asked to lecture about the superiority of the Italian race to the young students, he jumps on a desk and shows himself and different parts of his body including his earlobes and belly buttons as the perfect examples of a superior race. Having all the scene improvised, Benigni makes the film a mockery of racism, in the manner Chaplin did in “The Great Dictator”. 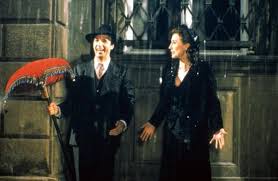 Another funny but thoughtful moment of the film is Guido using Schopenhauer will power’s philosophy to influence Dora to fall in love with him by his hand movements as if to hypnotize her. Despite a few degrading criticism of labeling Benigni as a clown, addressing Schopenhauer’s philosophy of influence on others that impacted Nietzsche whose philosophy of “Will to Power” and “Ubermensch” or “Superman” was an influence on Hitler is an example of his genius in mockery of extreme ideologies that once and again have led to humans’ misery. Finally and at the end of the first happy half of the film, Guido when he works as a waiter in Dora’s engagement party to a rich local, he steals her on his uncle’s horse that is painted green and written on some anti-semitic remarks.