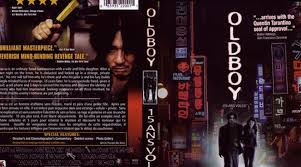 The film unconventional in many ways, opens with a future scene when the principal character, Oh Dae-su (Choi Min-sik) holding a man by his tie off a high terrace on the verge of falling. With this introduction of the persona, next he is seen drunk in a waiting room beside a man and a young woman, asking the man if he flirted with his daughter. Then he goes to the corner of the waiting room to urinate but is stopped by two police officers. He keeps talking tipsy that today is his daughter’s fourth birthday and his name means “take things one day at the time”. Then he cries that why he cannot get through the day today. His hand is finally cuffed to the wall while sitting that calms him down a bit. 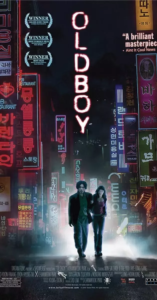 Finally a friend, No Joo-hwan (Ji Dae-han) releases him from the custody of the police. In the next scene Oh Dae-su is in a phone booth calling his daughter about her birthday and that he has a nice present for her. Then when Joo-hwan finishes talking to Oh Dae-su’s wife on the phone finds him missing. In the following scene after the title and credits of the film, we learn that Oh Dae-su has been kidnapped and placed in a cell. First only his face is shown out of a small opening on the bottom of the door of his cell, asking the reason of his captivity and how long he will be kept there as two months have already passed. In the next scene the place is shown to be a run down motel room.

From now on the film is a one man show and dialogue. He tells us that whenever a music is played there will be a sedative gas released in his room when people come in to clean the room, change his clothes and shave him. Through watching TV, that is his only company, entertainment, source of news and information of the outside world, a year later he finds out that his wife has been murdered with the suspicion of a personal motive reported by the police and him being the main suspect. Year after years is passed and Oh Dae-su, thinking hard of who could be his kidnapper(s) and makes a long list of those whom he might have offended. Through watching TV, he learns boxing and fighting and plans to take his revenge of those who kidnapped him. The major events of the outside world such as handing Hong Kong back to China, the inauguration of South Korean president and his visit of North Korea, the death of Princess Diana, the turn of the new millennium and the 9/11 fall of the New York City twin towers are all shown on TV through 15 years of his captivity. Finally after 15 long years, a young woman walks in his room, hypnotize him and telling him “imaging you open your eyes and you’ll be in field of green grass in the open air under the bright sun”.

In the next scene in a field of green grass, there is a suitcase that when opens up, Oh Dae-su gets out and sees himself in an exact place that the female hypnotist suggested. In a long shot the green grass field is revealed to be on the rooftop of a high building where weeds and grass have grown. After getting use to the eye-blinding bright sun after 15 years of living in a locked up room, he sees a young man with little dog on the roof top. He approaches the man, touches him to see if he is real, for not touching any live flesh all those years, but the man who has been apparently on the roof to jump and kill himself, is suddenly grabbed by his tie by Oh Dae-su when he tried to jump down. Then the two sit down and tell each other their own stories.