“Capernaum” by Nadine Labaki starring a real life 12 years old Syrian refugee, is the neo-realism of our modern era. A story of the third world countries that struggle not just with poverty and day to day living, but being thrown out of their poor life situations as refugees to other countries. The refugees from Syria and Ethiopia live and work illegally in Lebanon where their own people struggle with poverty and its war-stricken capital Beirut looks like a big slum. Zain (Zain Al Rafeea) a victim of such living condition, not knowing his age and why he was born to suffer demands suing his parents for bringing him to such a world. His parents themselves being victims of such unjust life situation, give his 11 years old sister, Sahar (Cedra Izam) away to marriage to a man, who soon dies from heavy bleeding during pregnancy. A Modern Neo-Realism of the Third World

Co-written by Labaki, Jihad Hojaily and Michelle Keserway from their own story with Georges Khabbaz, the film looks more like a documentary within a story of everyday life in the war and poverty stricken Beirut of Lebanon. Played principally by Zain, a true Syrian refugee that after the success of the film and his popularity specially at the Cannes Film Festival where he became the main star and focus of attention, he is accepted as a refugee by Norway as of November 2018 and started school for the first time in his life. 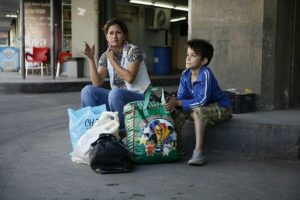 The film starts in a flashback in the courtroom when Zain is brought in along with her lawyer, Nadine Labaki herself as “Nadine”, charged with stabbing Assad (Nour el Husseini) their landlord whom he calls a “son of a bitch” causing her sister, Sahar pregnant and die from bleeding without him being able to farewell her. Zain does not know how old he is, nor his parents, and to the judge he demands suing his parents for brining him to this unfair world. Then the film goes back to the beginning and showing the condition of the lives of Zain, his family of four kids living in desperate and poverty like all their neighbours. Zain and Sahar, the older of the children have to work with no schooling, first selling juices, then diluting forged prescription Tarmadol pills purchased from multiple pharmacies and selling it as a drink on the streets.

Soon her sister, Sahar by force is sent away into the marriage to Assad as soon as the parents find out that she is in her puberty. Zain in anger and sorrow of the loss of sister, escapes from the house and lives on the street. Rahil (Yordanos Shiferaw) a young Ethiopian illegal immigrant woman while cleaning the windows at work watches Zain vagrant on the street, feels for him and takes him to her place. Soon Zain is of use for her as he babysits her infant boy, Yonas at home so she can go to work and not carry the baby with her. Rahil’s forged immigration documents are due to expire soon and she doesn’t have enough money to pay for the new documents, so she is arrested and put in jail for deportation along several other refugees mostly from Syria. Panicky Zain who is left alone with Rahil’s infant, has to take care of the baby all alone, steals milk and food for him, claiming to others the baby is his brother and beginning to sell tramadol again on the streets for him and Yonas to survive. On the streets, Zain meets a young Syrian refugee girl named Maysoun (Farah Hasno) who breaks to him that Aspro (Alaa Chouchnieh), a travel document forger is going to send her to Sweden. Zain demands that Aspro send him to Sweden as well, which Aspro agrees if only Zain gives him Yonas. Zain reluctantly agrees and goes back home to his parents to get his birth certificate or any identification so to forge a passport and flee the country as a refugee. He is told by his parents mockingly that he has no birth certificate or any identification, and they kick him out of their house. Meanwhile they also reveal to him that Sahar has recently died due to heavy bleeding with her pregnancy. Zain in anger and vengeance runs out of the house with a knife, finds Assad and stabs him that leads to his arrest and sentence to five years in a juvenile Prison.

While in prison, Zain still with hatred towards his parents who sold his sister Sahar to Assad to be finally killed and for bringing them to this unjust world, calls a live radio show and demands suing his parents for neglecting their children. He also discloses Aspro in adopting children illegally and mistreating them that leads to his house being raided, his arrest and the children and their parents being reunited, including Yonas and Rahil. The end of the film shows Zain’s photo is taken for his ID card, when for the first time he forces himself to smile in front of the camera.

Debuted at the 2018 Cannes Film Festival to compete for the Palme d’Or, the film won the jury prize and the prize of Ecumenical jury and received a 15-minutes standing ovation. The highest grossing Arabic and middle east film of all time, with a low budget of only $4 million, the film earned over $68 million worldwide. Holding a 90% approval rating on Rotten Tomatoes based on 159 reviews, the film was nominated for numerous international film awards including academy awards, and it won the best direction at the Asia Pacific screen Awards, the most valuable film of the year at the Cinema for Peace Foundation, best foreign film and audience award at FICFA Festival, best international film at St. Louis International Film Festival, best acting award for Zain Al Rafeeand best young jury award at International Antalya Film Festival, and many audience awards at numerous international film festivals around the world such as Film Fest Gent, Rotterdam, Leeds, Miami, Norway, Sao Paulo, Sarajevo, Stockholm, Calgary and Vilnius. In closing remarks “Capernaum” one more time will be redefined based on the following criteria: