“Sunrise: A Song of Two Humans” is a 1927 American silent romantic drama and suspense film directed by the German director F.W. Murnau and starring George O’Brien, Janet Gaynor, and Margaret Livingston. The story was adapted by Carl Mayer from the short story “The Excursion to Tilsit”, from the collection with the same title by Hermann Superman. Murnau used the then new Movietone sound-on-film system, making “Sunrise” one of the first feature films with a synchronized musical score and sound effects soundtrack. The film incorporated Charles Gounod’s 1872 composition Funeral March of a Marionette, which was later used as the theme for the television series Alfred Hitchcock “Presents” (1955–65). 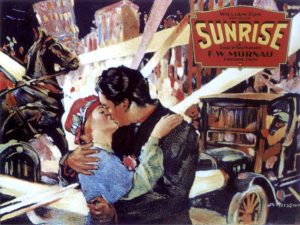 “Sunrise” won the Academy Award for “unique and artistic picture”, best cinematography and best art direction at the 1st Academy Awards in 1929. This was another rare occasion that a great film was recognized by Hollywood, as time goes by such great films are ignored. Janet Gaynor won the first Academy Award for “Best actress in a leading role” for her performance in the film. The film’s legacy has endured, and it is now widely considered a masterpiece and one of the greatest films ever made. In 1989, Sunrise was selected for preservation in the National Film Registry of the United States by Library of Congress for being “culturally, historically, or aesthetically significant”. The Academy Film Archive has preserved Sunrise in 2004. The 2007 update of the American Film Institute’s list of the 100 greatest American films has ranked “Sunrise” at number 82, and the British Film Institute’s 2012 Sight & Sound critics’ poll named it the fifth-best film in the history of motion pictures. Although the original 35mm negative of the original American version of Sunrise was destroyed in the 1937 Fox vault fire, a new negative was created from a surviving print. Before exploring this great work, its creator, F. W. Murnau will be briefly introduced. Friedrich Wilhelm “F. W.” Murnau (December 28, 1888 – March 11, 1931) was greatly influenced by the great German philosophers Schopenhauer and Nietzsche and the great playwrights, Shakespeare and Ibsen. During the World War I, Murnau served as a company commander at the eastern front and was in the German air force, surviving several crashes without any severe injuries. One of Murnau’s acclaimed works is the 1922 film “Nosferatu” , the first adaptation of Bram Stoker’s Dracula, a masterpiece of Expressionist film. He later directed the 1924 film “The Last Laugh”, as well as a 1926 interpretation of Goethe’s “Faust”. He later emigrated to Hollywood in 1926, where he joined the Fox studio and made three films: “Sunrise” (1927), “4 Devils” (1928) and “City Girl” (1930). Murnau in “The last laugh”, introduced the subjective point of view camera, where the camera sees from the eyes of a character and uses visual style to convey a character’s psychological state. It also anticipated the cinema verite movement in its subject matter. The film also used the “unchained camera technique”, a mix of tracking shots, pans, tilts, and dolly moves. Murnau’s “Nosferatu” and “Faust” were two of the first films to feature original film scores.

A prototype of suspense murder film:

“Sunrise” opposite to the “Wings” made in the same year and in competition for recognition and awards, relies heavily on the content story of lust, deception and finally murder. These all were beautifully depicted on the screen in a suspense and thrilling beat that was possible at the time within an expressionistic style. Murnau, already well experienced with “Nosferatu” and “The last laugh” in the same style, made this prototype of suspense murder film. A vacationing woman from the city (Margaret Livingston) lingers in a lakeside town, and after dark, she goes to a farmhouse where a man (George O’Brien) and the wife (Janet Gaynor) live with their child. She tempts the man by whistling to him from the fence outside, who was finally deceived and departs with her, leaving his wife, following a new romance.

After kissing him passionately in the moonlight, she demands him to sell his farm, and move with her to the city. When she suggests that he solve the problem of his wife by drowning her, he throttles her violently, but even that dissolves in a passionate embrace. The woman gathers bundles of reeds so that when the boat is overturned, the Man can stay afloat. The wife suspects nothing when her husband suggests going on an outing, but when they set off across the lake, she soon grows suspicious. He prepares to throw her overboard, but when she pleads for his mercy, he realizes he cannot do it. He rows frantically for shore, and when the boat reaches land, the wife flees. She boards a trolley, and he follows, begging her not to be afraid of him. The trolley brings them to the city, while her fear and disappointment are overwhelming. He plies her with flowers and cakes and finally she stops crying and accepts his gifts. Emerging back on the street, they are touched to see a bride enter a church for her processional, and follow her inside to watch the wedding. The man breaks down and asks her forgiveness, and after a tearful reconciliation, they continue their adventure in the city, having their photograph taken together and visiting a funfair. As darkness falls, they board the trolley for home, and back on the boat drifting back across the lake under the moonlight. A sudden storm causes their boat to begin sinking, that the man remembers the two bundles of reeds he placed in the boat earlier and ties the bundles around the wife. The boat capsizes, and the man awakes on a rocky shore. He gathers the townspeople to search the lake, but all they find is a broken bundle of reeds floating in the water. Convinced the wife has drowned, the grief-stricken man stumbles home, when the city woman goes to his house, assuming their plan has succeeded. The man begins to choke her, while the maid calls to him that his wife is alive, so he releases the woman and runs to the wife, who survived by clinging to one last bundle of reeds. The man kneels by the wife’s bed as she slowly opens her eyes. The man and the wife kiss, while the city woman’s carriage rolls down the hill toward the lake, and the film dissolves to the sunrise.

Picturing such story on the screen at the silent film era, 90 years ago, was only possible in an expressionistic style that Murnau as one of the leading figures in the field could achieve. He expertly used distorted expressionistic art design for the symbolic effect, cinematographic innovations, particularly impressive tracking shots, sparingly appearing titles, long sequences of pure action all in Murnau’s signature style. The extensive use of forced perspective is striking, particularly in a shot of the City with normal-sized people and sets in the foreground and smaller figures in the background by much smaller sets. The film was also groundbreaking in application of all cinematic techniques to portray the psychology and emotions of the characters, while they were deliberately go unnamed, lending them a universality conducive to symbolism. “Sunrise” in years to come will become such a prototype and model for many suspense, thriller crime films, from Alfred Hitchcock’s “Dial M for murder”, to “Cape Fear” of Lee Thompson (1962) and of Martin Scorsese’s (1991), “Knife in the water” of Roman Polanski (1962), “Fatal attraction” of Adrian Lyne (1987), “Sleeping with enemy” (1991), and “A perfect murder” (1998), and most recently “Gone girl” of David Fincher in 2014, to name a few. Despite many copies and adaptations, at least in the eyes and minds of the true film admirers, none of the above films have been able to get close to “Sunrise”! This is because “Sunrise” was only possible to make in the silent era that 1927 actually was the last year of this era, and by an expressionist filmmaker such as Murnau who already with his “The last laugh” has shown his mastery of imagery. The power of “Sunrise” is in its free camera movement for the first time in the silent era, its superimposed images (the man enveloped by two ghostly images of he city woman, train passing in the foreground while people walking in the middle and the city rises in the background), all these created in the camera long before the invention of optical prints, computer and digitalism. The camera shooting from above, having the characters under its watch, to create a psychological thriller with temptation and guilt floating within. All these created a seductive dream juxtaposed with a murderous nightmare, hard to make these days. 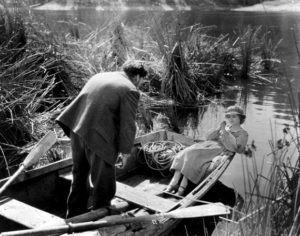 Another power of “Sunrise” is its many contrasts between rural and city lives and the environments, dark and light shadows, character contrasts of man and woman, rural and urban, love and lust, life and death. The simplicity of a rural wife and the complexity and temptations of a city woman, the moonlight peace of the rural environment versus the dizzying business of the urban milieu, the contrast between the temptation of lust and the endurance of love, are all the assets of “Sunrise”. All these were possible only in the black and white of a silent film with no interruption of the white noise of dialogues, mastered by an expressionist filmmaker to create a juxtaposition of a seductive dream with a murderous nightmare.

In closing remarks “Sunrise” by F.W. Murnau that is considered by many film critics and historians as one of the greatest film ever made, will be once again redefined based on the following criteria: