Introduction:
1927 according to some such as Peter Bogdanovich is considered the greatest year in the Hollywood history. That is why this year contains four great original films in our list of the greatest films of all time, “Metropolis”, “Wings”, “Sunrise” and finally “The Jazz Singer”. 1927 was also the decline of silent film era and the beginning of the sound and talkie movies era until now. Although before “The Jazz Singer” directed by Alan Crosland, there were earlier sound films with dialogue, but they were all short subjects, using “sound-on-disc” technique that was very primitive and of poor quality and not synchronized. In 1923, the “sound-on-film” system was introduced which had synchronized sound and dialogue, but the sound quality was still poor, and the films produced in this process were still short. Then the “Vitaphone” technique was introduced with the film “Don Juan” in 1926 with synchronized instrumental score and sound effects. But it was not until “The Jazz Singer” that the world watched the first film with numerous synchronized singing sequences and some synchronized speech. 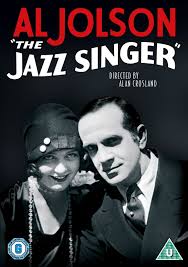 This first full feature sound film was not only talkie but the first feature film musical, to be adapted and followed by many future musical films such as “Singin’ in the rain” of Gene Kelly in 1952. The film depicts the fictional story of Jakie Rabinowitz (Jack Robin), a young man who defies the traditions of his devout Jewish family, to be a religious cantor (singer), running away from home, and years later changing his name and identity. Despite all these and the film being a frontier in technical and even the content story, based on a true story and a revolution against religion, the film in the first Academy Award ceremony, won only an award for Darryl F. Zanuck, for the producing the film, but not the direction or else! 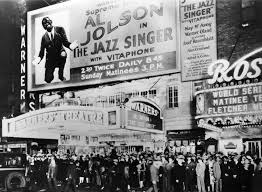 From a real life story to a stage show to a historical film:
Samson Raphaelson, a native of New York City’s writer, who had attended a performance of the musical Robinson Crusoe, Jr. in Illinois, starring a 30 year-old singer, Al Jolson, a Russian-born Jew who performed in blackface, was impressed by his acting. Then a few years later, he wrote “The Day of Atonement”, a short story about a young Jew named Jakie Rabinowitz, based on Jolson’s real life. Raphaelson later adapted the story into a stage play, “The Jazz Singer”. Later on after a version performance of the show on Broadway, with another actor, George Jessel, Warner Bros. acquired the movie rights to the play in 1926, and signed Jessel to a contract to make a film. Since the studio got into a monetary conflict with Jessel as he asked for more pay, the role was then offered to Jolson, who had inspired the film in the first place.

Although “The Jazz Singer” is popular for the first major sound feature film, it contains barely two minutes worth of synchronized talking. But there are numerous synchronized singing sequences and some synchronized speech, including a religious melody, “Kaddish” singing by a real cantor, Yossele Rosenblatt, appearing as himself. Still the rest of the dialogue of the film is presented through the caption cards, or inter-titles, standard in silent movies of the era. The premier reception of the film in New York, was extraordinary, as audience were seeing and hearing at the same time, music, songs and some dialogue. Jolson’s “Wait a minute” line had prompted a loud, positive response from the audience, so applause that followed each of his songs. Excitement built, and when Jolson and Eugenie Besserer began their dialogue scene, the audience became hysterical. Not only the critics, but ordinary audience realized the tremendous significance of the film and all welcomed the end of silent film era and the beginning of sound films. Not only the film attracted critics and the audience for its introduction of sound and music on the screen, but the story content of a struggle between religion and art, dogma and liberalism, captured the hearts, even it received favorable reviews in both the Jewish press and in African American newspapers.

The film also brought a major profit for Warner Bros. who were initially struggling with the budget of the film, and became a potential of feature-length talkies. “The jazz singer” soon became a model not for the sound films, but for “musicals” and only in a year brought another major profit for Warner Bros. by making a similar film “ The singing fool” with Al Jolson. The film is significant in the history of cinema and art in general, as it prompted the domination of film industry and Hollywood as the dominant form of the American entertainment industry and swept away the musicals off the stage. The national release of the film’s sound version in early 1928, was playing at a record 235 theaters. Soon Warner Bros. released their first all-talking feature, “Lights of New York”, while “The Jazz Singer” became the first feature-length talking picture to be shown in Europe when it premiered at London’s Piccadilly Theatre, where created a sensation. By mid-1929, Hollywood was producing almost exclusively sound films; by the end of the following year, the same was true in much of the Western Europe. 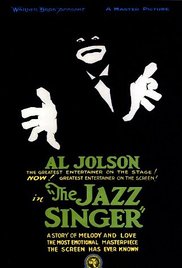 Moreover, while the use of blackface on the musical shows on stage at the time and later on in many musical films was a common practice and accepted, this notion was critically explored in “The jazz singer”, by juxtaposing two ethnic characters of a Jewish religious singer in a black face, ridiculing the American racism of the time. Jolson’s Yiddish accent mixed with a Southern veneer, is a good example of this irony of the American identity confusion as a nation, welcoming all with a racist discrimination. A black man is acceptable as a stage or jazz singer, dancer or comic actor, and a Jew is acceptable only as a cantor in his segregated culture, not on the stage as a popular singer for all. While the Jew jazz singer could hide his identity and escape the closed wall of his own culture and present his expansive art to the public at large, the black is still a prisoner of his own skin color, so the subject of racism in the American system.

Although many stage and screen versions of “The Jazz Singer” have been produced over years including the latest remake of Neil Diamond in 1980, the original film with its all subtleties, is certainly authentic and revolutionary in many aspects. The Jazz Singer has also been parodied in one part or others, in many future films, including “Singin’ in the rain” of Gene Kelly in 1952, up to the most recently in the “Happy Feet” animation in 2006. In short, “The Jazz Singer” remains to this day, a foundation for many musicals, specially of the jazz and popular genres, more so in narratives about musicians. In 1996, The Jazz Singer was selected for preservation in the National Film Registry of the US Congress library for being a “culturally, historically or aesthetically significant” motion picture. In 1997 edition of the best American films of all time by the American Film Institute, the film was ranked 90, but lost any position in its latest edition of 2007. 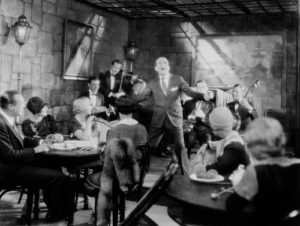 Conclusion:
In closing remarks “The Jazz Singer” is a classic example of a significant film in the history of cinema, not for its direction, even acting, cinematography, or special effects, but for its originality and invention. Although the subject story of the film is important and of a critical subject akin to the American societal structure, the film’s major significance is in its introduction of sound and music to cinema and ending the silent era. This frontier film will be once again redefined based on the following criteria:
1. Originality: “The Jazz Singer” is original in its introduction of sound and music to cinema, heralding the talkies or sound films and also the musicals, specifically the narrative types of film about musicians. The film is also a pioneer in heroic invention and advancing the art and science of film without much of greatness in direction, acting or other technical of filmmaking.
2. Technicality: The technicality of “The Jazz Singer” is simply in its launch of sound and music in the film industry, and that has been sufficient to put it up on a special position and rank in the history of cinema.
3. Impact Factor: “The Jazz Singer” has obviously influenced so many films directly or indirectly, in sound, music and dialogue on film, to presaging any musicals or musician narratives for years to come on the screen. The film has also perhaps influenced other films in its story content of cultural and racial identity conflict within the USA, ironically as a united nation.
4. Survival: “The Jazz Singer” has survived well to this day through many tributes and homages directly or indirectly, and in history of cinema as a starting point and a heroic achievement against all odds.