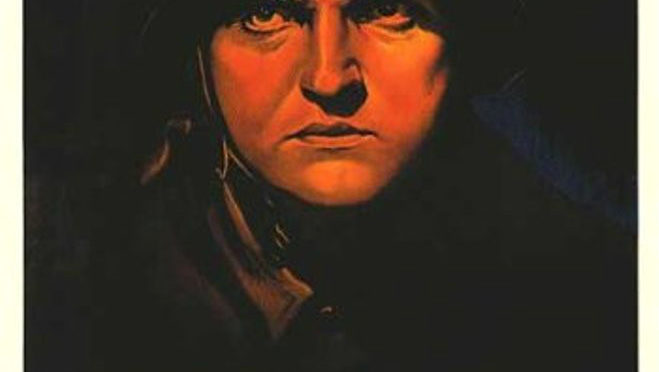 “All Quiet on the Western Front” of Lewis Milestone is a prototype antiwar film, adapted from the same name novel by “Erich Maria Remarque”. Although the film won the best direction at the second Academy Awards and not the best picture, is on the list of 100 best American film of the American Film Institute and is considered one of the best American epic films. In 1990, the film was also selected and preserved by the United States Library of Congress’ National Film Registry as being deemed “culturally, historically, or aesthetically significant.” It could be easily said that this film is the frontier all antiwar movies, and all such films in later years have been one way or another influenced by “All Quiet on the Western Front”. Before discussing this classic prototype antiwar film, its creator, “Lewis Milestone” deserves a brief mention. Milestone (1895-1980) born in Moldova of Russia to a Jewish family, moved to US in 1912 at age of 17. He enlisted in the US signal Corps, where he worked as an assistant director on army training film during the world war I and gathered some experience in war film making later on. After the first world war, he also worked as an assistant director in Hollywood until Howard Hughes promoted to the rank of director and he helped him with some of the aviation scenes of his “Hell’s Angles” film. This antiwar man made three films during the second world war, but ironically was blacklisted under the suspicion of sympathizing communism in Hollywood among many other greats. So he decided to leave US for Europe until late 1950’s when he returned to make “Ocean’s 11” with Frank Sinatra and Dean Martin, then “Mutiny on the Bounty” with Marlon Brando. Lewis Milestone’s final request before he died in 1980 was for Universal Studios to restore “All Quiet on the Western Front” that had been cut short everywhere in the world to its original length. That request would eventually be granted nearly two decades later, so that the current popular version today is that restored version.

The above phrase, and “When it comes to dying for country, it’s better not to die at all.”; “How do they start a war?”; “How could one country offend another?”; “I think maybe Kaiser wanted a war.”, etc. are the dialogues in the film. So the film is not the first antiwar film in history, it is a well done one. Although the film was adapted from the novel of the German author “Erich Maria Remarque” who wrote his book about the German soldiers in the first world war that made him an enemy of Nazi, it is still the first one to be put on the screen, for a larger and ordinary crowds who don’t read much to see not only the casualties of the war but that no one other than the governments want it. Despite many similar and different antiwar movies for many other wars were made later on, this classic still stands out as the grandfather of all. The antiwar sentiment and logic of the film, seen and heard in the scenes and dialogues from ordinary soldiers old true for any war, then and now! “All Quiet on the Western Front” is an example of a film with such a significant human content, i.e. antiwar that for this reason alone stands out as one of the greatest film of all time. War that is still ongoing to this day as it has been always throughout the history, is a plague of humanity, falling on many by a few and nothing is better than sliver screen to disclose this humans’ wickedness for greed. “All Quiet on the Western Front” is an exemplary enlightenment that art including cinema could not be impartial and has a serious responsibility towards humanity. The antiwar content that all humans’ survival and future depend on, is not like any regional, temporal issues or trend of era that a true cinematic art should avoid, but its urgent responsibility to reveal and do it well.

“All Quiet on the Western Front” is not only about the content story that is very significant, but a cinematic achievement, portraying the crime of war ultimately with its splendid cinematography and special effects for the time. This great film was made only one year in the inception of sound film and when still in Europe and else, the films were silent. More importantly in Hollywood even for many years to come and while the world, particularly Europe burnt and suffered immensely from the first world war, and soon from the second world war, commercial films such “The Broadway melody”, “Cimarron”, “Cavalcade”, “It happened one night” and alike were releasing in total ignorance to what was happening in the four corners of the world!

The film tells the story of war makers in any time in history, then and now, that encourage or fool young people to join the army for “saving the Fatherland”, or for “the national security”! Then these young soldiers as soon as step in the war filed, their romantic delusions are quickly broken by realizing the truth behind the made up wars. They are subjected by force or brain wash to kill other human beings and sometimes even murder civilians including women and children in the name of patriotism and their country. The film shows the combat zone, as a mayhem, with new groups keep replacing the old dead ones. The soldiers fight under the poorest circumstances, with no food even for days, and the young soldiers have to “pay” for their dinner with cigarettes. The experience of the war in the film like any other wars in the eyes of young soldiers are horrifying and inhumane, getting locked up in the awful trenches for several days. Here their eyes and minds opened to the truth of war, they start questioning the causes of the war and if the war is their business, and suggest “the leaders of Europe should be stripped to their underwear and fight it out with clubs”. 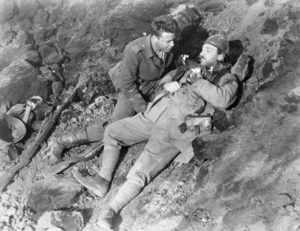 Like in any war, the film shows how the soldiers who are initially at war with anyone or any country, find each others even their enemies as humans as they are. When one of the main soldier character, Paul stabs a French soldier, but finds himself trapped in a hole with the dying man for an entire night, he desperately tries to save his life as a human to another, and finally fails to stop him from dying, he begs and asks the dead man for his forgiveness in tears. When lastly some of the soldiers lucky to go back home alive, such as Paul, they are shocked by how uninformed everyone is about the actual situation of the war, and at his school, the teacher as before still keeps brainwashing younger kids to join the army and the war for the same patriotic fervor that caused so much casualties to them. Despite all these some soldiers such as Paul return back to the front lines, witnessing more killings of their peers and themselves. In the final scene, Paul’s eyes cast on a butterfly just beyond his trench, and when he tries to reaches out towards the butterfly with a smile, he is too exposed, shot and killed by an enemy sniper.

“All Quiet on the Western Front” has been hailed from its initial release as a classic antiwar film with accolades such as “The league of Nations could make no better investment than to buy up the master-print, reproduce it in every language, to be shown in all the nations until the word “war” is taken out of the dictionaries.” by Variety. The film inspired many filmmakers for years to come such as Steven Spielberg in making “Saving Private Ryan”. Despite these tremendous praises, due to its antiwar and anti-German messages, Hitler and the Nazi party banned the film from Germany in the 1930s and early 1940s. During its brief run in German cinemas in the early 1930s, Nazi brown shirts under the command of Joseph Goebbles disrupted the viewings by setting off stink bombs, throwing sneezing powder in the air and releasing white mice in the theaters, eventually escalating to attacking audience members perceived to be Jewish and forcing projectors to shut down. Even Hollywood in a collaborative pact with Hitler, agreed with a significant cut in the movie to make it more palatable for the large film audience in Germany. The film also in the period of 1930 to 1941, was banned in Australia, Italy, France, Austria and some other European countries, with the prohibition officially removed in1952 in Germany, 1963 in France, not up until 1980s in some other countries. In closing remarks “All Quiet on the Western Front” is not only a classic example of antiwar films, but an outstanding original example of what films’ responsibilities and duties are to all the audience of the world. War as a universal plague of humanity from the time of antiquity to the very present moment, has no better medium than the silver screen for revelation. Hollywood as the major sector in the industry need to stop making, cheering and awarding “La La Land” types of films at the time of wars and atrocities, when thousands of innocent people are killed every day in the government made up wars. Here this classic work will be redefined one more time based on the following criteria: