“King Kong” directed by Merian Cooper and Ernest Schoedsack is an original adaptation of a story by Copper and Edgar Wallace. The film is the first in a genre of its own kind with remakes in 1976 and 2005. Although the film was not the first genre of man against beasts, but the first one with a pre-historic giant ape, a prototype for later years films such as Jurassic park film series. The film is also the first classic to portray the affection between the beast and the man (Ann Darrow, the leading female protagonist acted by Fay Wray), while majority of other humans out of fear, attacking and finally murdering King Kong in a frenzy. King Kong was not the first film on a jungle beast, as films such as “Beasts in the Jungle” of 1913 showing fights of man with lions, tigers, and other animals; “Tarzan of the Apes” of 1918, “The Lost World” of 1925; and “Ingagi” of 1930 (showing man and the jungle gorillas’ in fight and even intimacy) had already captured the silver screen and the box office, as the last film was one of the highest-grossing movies of the 1930s at over $4 million. In fact “Ingagi” was influential in the writing and production of King Kong. Merian Copper, the principal writer and director of King Kong, had been long fascinated with gorillas and other jungle beasts since his childhood. Later on he developed the storyline of the encounter of some adventurist documentary makers with a giant gorilla in a remote island and presented it to the Paramount Studios in the first years of the Great Depression. But he was rejected due to its high cost of sending the film crews to Africa. Then he submitted his project to RKO in 1931 that was accepted, though the cost of travelling the film crew to Africa was still a setback. While Cooper immediately was in the process of making “The Most Dangerous game”, a story about a big game hunter, co-directed with his friend Ernest Schoedsack, they built a jungle stage in the studio. Afterwards when he achieved the similar jungle set in the studio in the film “Creation” about an island of dinosaurs, he realized that he could do the same with King Kong and spare the high travel cost. 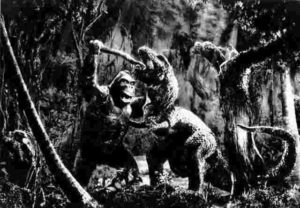 After the RKO approved the production of the film, Marcel Delgado constructed King Kong to simulate a gorilla 18 feet tall, using different materials such as aluminum, foam rubber, latex, rabbit fur, bearskin, metals, glass, wires, wood, cloth, etc. The dinosaurs were also made by Delgado in the same fashion as King Kong, based on the models in the American Museum of Natural History in New York City. The King Kong’s special effects, such as stop-motion animation, matte painting, rear projection and miniatures, decades before the digital age, were groundbreaking achievement. At the time since these special effects unlike today all done on computer, were painstaking and difficult to achieve and took the crew weeks to complete each action scene. The most difficult achievement for the special effects was to merge them perfectly with the live-action footage to make the interaction between the humans and the creatures of the island believable. These were achieved by using a few new different techniques, such as the Dunning process, the Williams process, rear-screen projection that all were invented for this film and later on adapted by other films. The result of these achievements in film techniques made some over years to doubt that certain scenes was played by an actor wearing a gorilla suit than such a prototype combination of animation and live footage for the first time. To achieve such gigantic undertaking like the King Kong himself, it took 8 months to complete the film, while all the other films of the time took only a few months to make. Some actors of the film had so much time in between that they were able to fully complete work in other films. Most of the action footage scenes were filmed on location, such as the shots in the harbor of New York City, naval war planes, views of New York City from the Empire State Building, the gas bomb scene on a beach at San Pedro, California, all of the native village scenes in Culver City, and the scene of Ann being led through the gates to the sacrificial altar was filmed at night with hundreds of extras and 350 lights for illumination. The film was cut from an original 125 to 100 minutes length, by deleting some scenes unrelated to King Kong character, including the most infamous the “Spider Pit Sequence”, where a number of sailors from the Venture survived a fall into a ravine, only to be eaten alive by various large spiders, insects and other creatures, that Peter Jackson in his 2005 King Kong remake, incorporated this sequence. The sound effects of the film was another new achievement in films at the time, such as the King Kong’s roar that was created by mixing the recorded roars of zoo lions and tigers, subsequently played backwards slowly. While RKO decided not to have an original film score composed for the cost reason, Cooper believing the film deserved an original score, paid Steiner $50,000 himself to compose an original score, that took six weeks and was recorded with a 46-piece orchestra. The result was a score unlike any that came before and marked a significant change in the history of film music, for being the first feature-length musical score written for an American “talkie” film, and also the first major Hollywood film to have a thematic score rather than background music, the first to mark the use of a 46-piece orchestra, and the first to be recorded on three separate tracks (sound effects, dialogue, and music). King Kong opened at the 6,200-seat Radio City Music Hall in New York City and the 3,700-seat RKO Roxy across the street on March 2, 1933. The tickets of the first four days, ten-shows-a-day were sold out, setting an all-time attendance record for an indoor event. Upon release, the film was received very well by audience and critics alike, being hailed by “Variety” as a powerful adventure, by the “New York Times” as a fascinating adventure plot, the “New York World-Telegram” as “one of the very best of all the screen thrillers, done with all the cinema’s slickest camera tricks”, and by the “Chicago Tribune” as “one of the most original, thrilling and mammoth novelties to emerge from a movie studio.” Roger Ebert, the popular film critic realizing the outdated special effects of the film, hailed it as “there is something ageless and primeval about “King Kong” that still somehow works.” Despite the film did not receive any recognition and nomination by Academy Awards even for its unique special effects and score at the time, it has been since received some significant honors. In 1975, Kong was named one of the 50 best American films by the American Film Institute and in 1991, the film was deemed “culturally, historically and aesthetically significant” by the Library of Congress and selected for preservation in the United States National Film Registry, and in 1998, it ranked #43 on AFI’s list of the 100 greatest movies of all time. King Kong was re-released in five times in 1938, 1942, 1946, 1952 and 1956, to great box office success, until it was sold to television on March 5, 1956. King Kong, the film and its character inspired several imitations and homages such as “Son of Kong”, a direct sequel to the 1933 film that was released nine months after the original; “King Kong vs. Godzilla” and “Kong Kong Escapes” both directed by Ishiro Honda after RKO sold the reproduction of the King Kong character to a Japanese studio in 1960’s. In 1976, Italian producer Dino De Laurentiis, released his modern version of King Kong, followed by a sequel in 1986 titled “King Kong Lives”. Finally in 2005, Universal Pictures that later on holds the right to the film released another remake of King Kong, directed by Peter Jackson, Legendary Pictures and Warner Bros. There is also a most recent remake of King Kong titled “Kong: Skull Island” to be released soon in 2017. 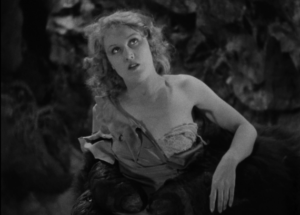 In closing remarks “King Kong” is not only a classic example of encounter of man and beast, and a horror-adventure film, it is a prototype of any such jungle film to appear on the silver screen until today, and the forefather of a classic special effect achievement in cinema. Moreover King Kong is story of grand undertaking behind the camera not just to please, entertain and scare the audience, but to prove self-achievement when there is doubt if something impossible could be a possibility. King Kong, despite looking on the surface a commercial special effects, action and horror film, with a plane story, it contains sentiment and puts humans in the face of a giant gorilla at shame for his aggression. King Kong is not just a monster or even a beast, but he is a giant gorilla that genetically sharing one of the highest with us. His behavior of attraction to a woman, his fear and defense is like ours. We are all descendants of gorillas and apes and yet we act more beast-like and encage wild animals such as King Kong and take them away from their home environments. There is such sentiment in the film as King Kong is the protagonist and the main character of the story, that never repeated in its future homages and adaptations even the “Jurassic Parks” series and “Aliens”. Here this classic work will be redefined one more time based on the following criteria: