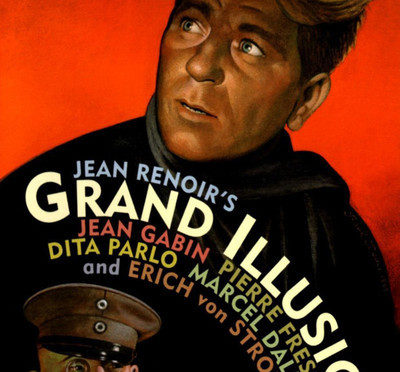 “The Grand illusion is story of people like you and me, thrown into this terrible adventure that we call war.” These are the words of the French creator of the film, the great Jean Renoir, years after in the re-release of the film. In relation to the story and content of the film that held through beyond the world war I, that the film is about, into the horrible world war II, Vietnam, Korean and now Gulf wars, Renoir continues to proclaim “The question that we ask our agonized world today closely resembles the question that Spaak (the screen writer), myself and many others, put to ourselves when working on The Grand Illusion…that things are as relevant today as it was at the time.” “We should all be grateful for.” that is what Martin Scorsese comments on the film, and “If I had to save only one film in the world, it would be Grand Illusion” claims Orson Wells, the creator of Citizen Kane. What has made “The Grand Illusion” such an icon of cinema? The film, one of the masterpieces of French Cinema by one of the frontiers of the French film art, Jean Renoir, is a film about world war I, but without any war or killing scenes that is customary in such genre. Instead the film’s theme is the class distinction and relationship among humans at the time of war in a prison camp. Through such story plot, Renoir two years before the start of another world war, conveys his anti-war message that humanity goes beyond territorial and economic conflicts, race and nations. The film truly depicts that the ordinary men or soldiers are not in fact at war, and that still connect as humans with common interests. But before discussing further about the film, lets see who was its creator.

Jean Renoir was the second son of Pierre-Auguste Renoir, the renowned French painter, while his older brother was a stage and film actor. He was mainly raised by his nanny, Gabrielle Renard who introduced him to puppet shows and “She taught me to see the face behind the mask and the fraud behind the flourishes. She taught me to detest the cliché.” During the World War I, Renoir was serving in the French cavalry, and was injured by receiving a bullet in his leg, that led him to serve as a reconnaissance pilot. His leg injury left him with a permanent limp, but allowed him to discover the cinema, and the works of D.W.Griffith and Charlie Chaplin. After making several silent films, in the mid 1930’s when Germany and Nazis were preparing Europe and the whole world for a full fledge war, and Spain was burning for freedom from right wings and dictatorship, he like many other intellectuals joined the popular front to fight and resist fascism that was on rising.

As the artist needed the right social and historical circumstances to create, Renoir made his first masterpiece “La grand Illusion” in 1937 with great acclaim, then shortly after at the brink of second world war in 1939, his second masterpiece “The Rules of the Game”. Both of his great films were seized by France occupying German armies and banned until the end of the war. Both films have been regarded one of the best films ever made collectively by the world most renowned critics, film historians and filmmakers alike. After the war in 1940, Renoir moved to the United States and Hollywood, where he could not create as he did at home. In 1975, Renoir was granted the lifetime achievement award by Academy Award and the rank of commander in the Legion d’honneur by the French government. He died on February 12, 1979 in Bevelry Hills, but his body was returned to his homeland, France and was buried beside his family. The Grand illusion was based on the novel “The Great Illusion” by the British economist, Norman Angell published in 1909, with the second edition a year later and more shortly after, and by different publishers. Norman Angel (1872-1967) an anti-war and anti-Fascism activist, who was awarded the Nobel Peace Prize in 1933, refuted the ideology that military power and war could expand economy and wealth of nations. While he attempted to prove an ancient human’s history old theory and belief of power and wealth expansion by the means of war to be a “Great Illusion”, his own naïve humanistic ideology proved to be a “Grand Illusion”! Not the book and the film adaptation of Jean Renoir could stop the world sinking into another world war (II), but the world mostly by superpowers continued on the path of creating wars for generation of power and wealth up to this day and in the future! While the book of Angel is more an economic text of a naive ideology, the film of Renoir attempted to show that even within a war and no matter how a nation and her soldiers are provoked to hate another nation for the sake of governmental interests, the people of different nations are all the same and hold no animosity to each other. The film goes even beyond this point to show the class distinctions and that even at war, while ordinary soldiers who fight the most and suffer the most, are still of lower class and are not treated the same even in a prison camp. Renoir shows that after the war, won or lost, the bourgeoisies are still the upper class and back to their comfortable lives, while the lower class soldiers still have to struggle for life. In brief, Renoir’s message in the film went far beyond the book to prove a true human nature out of any ideology or greed that separates our species, does not know any boundaries by nationality, religion and any other arbitrary borders. This is very true to this day as all the people around the world hate wars and consider killings in the wars, simple killings and murders.

From Great to Grand Illusion:

The book “The Great Illusion” as discussed above, was an anti-war economic thesis that on its own was an illusion as it failed in time and could not stop wars happening one after another after the WWI. But “The Grand Illusion” of Renoir on portraying the futility of the war and human connections beyond any borders have always been true then, now and throughout the human history. This human fact has caused regret, sorrow and guilt in the war makers over time, from Marcus Aurelius, the Roman emperor who regrets he had not given anything to this world other than 40 years of war (see Gladiator) to Robert McNamara who regrets causing the Vietnam war (see The Fog of war).

The film starts with the shot of a French air fighter by Germans in the World War I, and the capture and disposition of two French officers in a prison camp. But as Jean Renoir has said in an introduction of a re-release of the film years later, WWI was not as inhumane as WWII and the Germans were not as racist. This shows throughout the film that first the German pilot who shot the French plane, invites the two French officers to dinner and drink. They treat each other as there is no war and no boundary between them, other than the class distinction, as the camp is divided into two sections of low rank and high rank officers. There is no distinction between any of the prisoners on either camp regarding the nationality or race, as French, English, Russians are all treated the same by the German host and captor with respect, as long as they follow the camp simple rules that they don’t do much and keep attempting to escape. The film that is in genre serious and drama, has quite few funny and comic moments, like a phrase by a prisoner planning to escape that “Golf is made to play golf, tennis is made to play tennis, and prison is made to escape from”! The prisoners are sent frequently parcels form back homes, including food and at times they eat better their German captors who mostly eat cabbage dishes. The camp looks like anything but a prison, as the men eat well home made meals, drink wine and cognac, play and socialize that all are no problems to the Germans. In fact the German guards like to hear French music, providing the prisoners harmonica to play for them. Both sides wish the war will be over and they will be back home to their wives. At the same time the film through conversation between the two French pilots conveys the message that Europe and the world was changing, and “no matter the outcome of the war, it will be the end of our class”, denoting to the end of Bourgeoisie.

After several escaping attempts, finally two officers succeed to flee, but one is shot by the German head officer who feels guilty for shooting another high rank officer. He visits him in the camp hospital and blames himself for shooting him in the stomach while he aimed at his leg. The two escapees finally after days and nights of walk, arrive in a German farm where a lady with her little daughter live alone. She receives them to their surprise, treats their wounds, feeds them and they all live for a while like a family together and helping each other. This is despite the lady has lost his husband and brothers in the war and showing their photos to her guests. When it is the time to leave, the French officer played by Jean Gabon has a hard time to leave as he and the German lady are in love and as the lady cries “I was so happy after years of living alone to hear your footsteps around the house”! At the end of the film the two escapees leave the German border into Switzerland and the final words or message of the film reiterated by one to the other who asking where the border is in the heap of snow that “These are all man-made borders and the nature cares less”! The film is great in a few aspects. First it was made right after the first world war and when the Europe was in preparation for another larger scale world war created by Germans, Italians and Japanese dictators against the rest of the western world for obvious economic hegemony reasons. So such film as discussed above was not welcome at all by the governments of any sides, but ordinary people and viewed by 12 millions in France. The film is unlike any war or prison of war films before and after to this day. The film is not to reveal the casualties of the war that have been shown many times thereafter on the silver screen. The film is about the futility of the war, as all humans are the same and are not enemy to each other and that the wars and the borders between them are all made up by the governments for economic reasons. The film in a very settle way depicts the true humans connection beyond any border of religion, nationality and race. This still holds true and as Jean Renoir has said in the re-release introduction of the film, that is more true now even than before, and now that he is gone among us, his universal message holds truth more than any time. The governments still segregates people of the world and provokes them against each other to take them to wars to kill (murder) each other for their own greedy interests!

In closing remarks “The Grand Illusion” of Jean Renoir one more time will be redefined based on the following criteria: