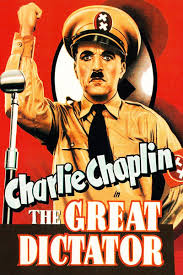 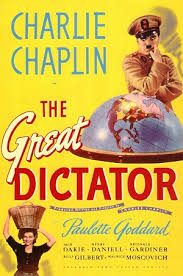 Imagine it is 1940 and Europe is at the feet of an ambitious and ruthless dictator and a destructive military machine, and only one man could bring it down to his feet. That man is not a head of a state, a general or a soldier, but the genius of cinema, Charlie Chaplin. “The Great Dictator” on its heroic idea of making and releasing alone at such a sensitive time that could easily lead to the assassination of Chaplin, it is a great achievement and would be impossible not to include it in any list of the greatest films of all time. But of course as any Chaplin’s film, it is multifaceted and harbors its great writing, acting and directing. The originality, the technicality, the impact and the survival of the film was seen right away at the time of its release to this very day. Chaplin once again proved that he is one of the greatest genius of cinema and at the very heart of people of the world.

This political satire comedy was the first Chaplin’s true sound film after a few years of still producing silent into the era of sound film. At the time of 1940 that still the United States was at peace with Nazi Germany, Chaplin stirs the world and more so the America, where the film was produced and released first. That was the first American protest to the dictatorship of Nazis, and at the head Adolf Hitler (in the film Hynkel) and his allies, Italy with Benito Mussolini (in the film Benzino Napoleoni) at the head, and a loud voice of protest against their racism and anti-semitism. Chaplin artfully plays one of the first double roles in cinema, both as the dictator, Hynkel or Hitler and a persecuted Jewish barber. The film became so popular with the audience world wide, to become Chaplin’s most commercially successful film. 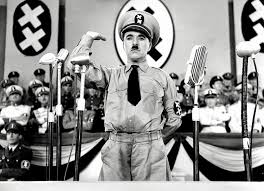 As he mocked the capital machinery in the “modern Times”, Chaplin mocks the war machinery right from the start, when in the war camp of the world war I in 1918 as a soldier. Later on in the role of the dictator Hynkel, in his speech to the Tomanian nation, in fact he mocks Hitler German-sounding Gibberish language, very similar to Hitler orations to the whole German nation before and during the war. The dictator speech that liberty, democracy and free speech “stunk”, is not only one of the greatest moment of cinema, but it was one of the greatest blow to the Nazis’ war machine. Chaplin intelligently but very clearly imitates the German Nazi, with very similar terms such as Hynkel for Hitler, XX for SS, Tomonia for Germany or Germania, Benzino Napoleoni for Benito Mussolini, Bacteria for Italy or Italia, Osterlich for Austria, and also satirical terms such as “Garbage” for the minister of propaganda. The satire is not only in words and phrases, but in the whole content of the film such as in the agenda of the dictator to “get rid of Jews first then brunettes to have only blondes, or pure Arians” ruling the world.

Playing and dancing with the balloon globe in his office, the great dictator dreams of ruling the world, a desire of any other emperors of the past from Caesar to Napoleon , Hitler and US, but such bubble wish in the film bursts as it has always happened in the real history. The bickering of the two dictators of Tomania and Bacteria over who is the stronger in the barber shop of the dictator’s palace, by elevating their seats, then their fight over signing a peace treaty in the dinning room is one of the funniest moment in the history of cinema. Immigration of Tomanian Jews to Osterlich like the German and Eastern European Jews at the time of World War II, is a prototype for the future film scenes such as “The Grapes of Wrath” when poverty moves people out of their lands to a promised land. 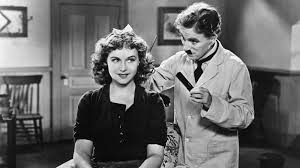 The final scene of the film when Chaplin in his Jewish barber role, impersonates the dictator, Hynkel and delivers a humanistic speech in the middle of the WWII in 1940 is a political manifesto. In his speech, Chaplin invites all the people and the soldiers to unite and carry on the unmet promises of the dictators, who climbed to the power by lying to people to only fulfill their own greed of power. He declares to the crowed that we should live by each other’s happiness – not by each other’s misery, or hate and despise one another. He continues that we have lost the way life that is free and beautiful.

“The Greed has poisoned men’s souls, has barricaded the world with hate, misery and bloodshed. We have developed speed, but we have shut ourselves in, machinery that should give us abundance, has made us cynical, unkind. We think too much and feel too little. More than machinery we need humanity. More than cleverness we need kindness and gentleness. Without these qualities, life will be violent and all will be lost.

The aeroplane and the radio have brought us closer together. The very nature of these inventions cries out for the goodness in men – cries out for universal brotherhood – for the unity of us all.”

Chaplin knows that through his film, his voice is reaching millions throughout the world – “millions of despairing men, women, and little children – victims of a system that makes men torture and imprison innocent people. The hate of men will pass, and dictators die, and the power they took from the people will return to the people. And so long as men die, liberty will never perish.” 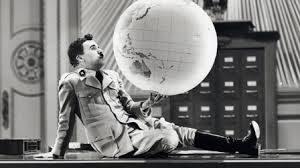 In fact Chaplin who had earlier seen the Nazi propaganda film of “Triumph of the Will” by Leni Riefenstahl with the French filmmaker, Rene Clair, was inspired to use such propaganda power in “The Great Dictator” and turn it against Nazis. Chaplin who was liked already across the globe including Europe and Germany, even before making “The Great Dictator”, was resented by the Nazi Party that published a book titled “The Jews Are Looking at You” in 1934, describing the comedian as “a disgusting Jewish acrobat”, although Chaplin was not Jewish. Chaplin prepared the story throughout 1938 and 1939, and began filming in September 1939, one week after the beginning of World War II, and finished filming astonishingly in six months, hurrying it to reach the people of the world and perhaps help to end the war. Apparently Chaplin sent a copy of the film to Hitler, with some sayings that he viewed it twice. Meredith Willson who wrote the music score of the film has talked about Chaplin who created so many score ideas in the film that even surprised him as a composer, such as Wagner’s “Lohengrin Prelude” in the famous balloon dance scene, that was all Chaplin’s idea. 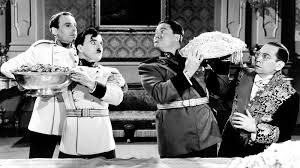 The British government who was at peace with the Germany Nazi at the time of film production, announced that it would prohibit its exhibition in the United Kingdom, in keeping with its appeasement policy concerning Nazi Germany. But by the time the film was released, Britain was at war with Germany and the film was welcomed in part for its obvious propaganda value. When the film was released in France in 1945 after the war, it became the most popular film of the year, with admissions of 8,280,553.

In closing remarks “The Great Dictator” one more time will be redefined based on the following criteria: