The film starts with this tribute “To the memory of those who made us laugh: the motley mountebanks, the clowns, the buffoons, in all times and in all nations, whose efforts have lightened our burden a little, this picture is affectionately dedicated”. This opening dedication message, conveys at least half of what this film is about, but goes beyond and actualize what it aimed at. A Simple Film of multi-genre: Heart warming and Enlightening

While with the opening message, the viewer expects a comedy, the film’s opening scene is a fight on the roof a train between two men, who finally fall in a river, when we notice that was a scene of another film that was being watched by a director and two producers for viewing approval. The director, John Sullivan (played by Joel McCrea) who is not happy about the film, states his desire of making a picture about poverty and suffering of poor people who live in every corner. But the producers argue with him that his idea would not please the market and is not profitable. Sullivan keeps insisting and the producers keep trying to convince him to change his revolutionary ideas and mock him who does not know anything about poverty and suffering. Then Sullivan who agrees with them of his lack of such life experience, finally comes up with the idea of experimenting the poverty and suffering by wearing torn clothes hitting the road with only 10 cents in his pocket to meet the poor people in struggle. To the surprise of his butler but with his assistance, he starts his experiential genuine excursion, while reporters in a trailer follow him step by step. After a short while of walking, he runs into a young boy in his toy car who invites him for a fast ride so to loose the reporters. Here the film not only turns to a comedy, as the car while does not look a real one with fake speedometer, it starts speeding and the film turns to an action genre, perhaps the first one of such for the time, being hastily chased by the reporters’ trailer. Then action and slab comedy mix as people including a black chef on the trailer, fall and tumble around, a police on the road by his motorbike gets mud splash on his face and the cook ends up with his face in a bowel of white whipping cream.

Sullivan finally at the end of this goose chase, makes an agreement with the reporters to end their chase as he will report the whole adventure to his bosses, and resumes his walk alone. Later on we see him working in a lady’s house chopping woods, attracted by the lady who is married but her husband not on the premise, alone with a female servant. She takes care of Sullivan and after the first day of work, three of them go to an outdoor movie watching. After coming back home, the lady flirts with Sullivan, trying to take him to her bed, while we notice the husband in a picture frame on the wall of the bedroom, keeps changing his demeanor and gives her the bad look. This scene is innovational as well while funny, and fits in the film very properly. Sullivan locked in his bedroom by the lady who has left open the bathroom door that joins to her bedroom open, attempts to flee by climbing down his bedroom window, but ends up falling in a bucket of water in the front yard. The comic nature of the film turns into a romance, when Sullivan lands in Hollywood, after being dropped by a truck driver who gave him a free ride. He enters a diner to have a coffee, the only thing that he could afford with ten cents in his pocket, but a beautiful young woman inside, who’s identified as “the girl” (played by Veronica Lake) notices his poverty and hunger, offers him free ham and eggs as well. Sullivan attempts to pay back the generous girl, a ride in his fancy car, by calling his staff, then taking her to his house, where she is not attracted to his wealth and throws him to his swimming pool. Then he throws her in the pool as well, and soon the two butlers of the house while serving them breakfast are being thrown in the pool with them in another comic scene. The girl insists Sullivan to join him in his expedition to experience poverty at first hand as she could be of help. Sullivan first refuses, then accepts and soon they are both off, jumping on a running train like many other trumps for a free ride. In the first wagon, two poor men, giving them a bad look and call them “amateurs”, and when Sullivan asks the out of place question of learning their opinions about the labor situation, they leave them at once. At the end of their overnight train ride, they jump off the wagon in the morning, where they find that is Las Vegas, entering a coffee shop. They order two cups of coffee for the only ten cents that Sullivan has in his pocket, but he could not find the coin as he had lost it on the train. The generous coffee shop man noticing their situation give them the coffee and donuts, that soon Sullivan pays him back with $100 after contacting his crew. 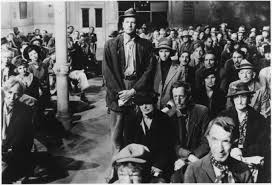 In Las Vegas, where one expects money and glamour, we see the couple among poor, reminding us of the scenes of “Grapes of Wrath”. Here the comedy changes to a full American realism of the era, revealing the truism of the nation in the middle of the WWII, while still in peace with the Nazi Germany. In a twist, the scene of Sullivan and the girl also reminds us of Chaplin’s trump and his girls, but this time the trump Sullivan is not empty handed, but he is a rich Robin Hood type who is striving to understand the poor and help them out of misery. In brief the film pleases the rich and the poor alike, the warm hearted rich who would like to give a bit to the poor, and to the poor who dream of some hands to feed them and pull them up their swamps.

The film that is a mixture of comedy, romance, melodrama, action and realistic drama, later on will turn into a thriller and “Les Miserable” type of action drama when a poor man chasing the generous Sullivan handing the poor money , in a thrilling chase and attack, before getting run over by a train on the railroad after running away with the stolen Sullivan’ money. Sullivan is suspected to be dead by the girl and his staff, but later on in a scene he is shown to be alive and sleeping on a moving train wagon. When he is faced by a train guard and is pushed to leave the area, he attacks the guard with a rock, but he is arrested and sentenced to a hard labor prison camp. Here Sullivan after a while being isolated in a box for his oppositional behavior, is taken along with the other prisoners on the Christmas eve, to a nearby black people church for a cartoon film viewing entertainment. The film at this stage, is not only sympathetic with the poor and their sufferings but with the low life criminal sector of the society, who may like Sullivan by some deliberate or accidental reasons had fallen in the tramp of an unfair law. The film after another turn of adventure and suffrage on the part of the protagonist, returns back to its normal path of life as Sullivan is found in the prison camp and is saved back to his rich life status. With all his suffering experience, the producers finally agree with his original film project to make a film about the sufferings of humans, with the title of “O’Brother where art thou?”. But Sullivan who remembers how the prisoners and ordinary and poor people were enjoying the funny cartoon film and forgetting about their real miserable suffering lives, announces his desire this time to make a film to make people laugh, as they have enough of sufferings and only laugh will lighten their hearts. And the film ends with this conclusion. Hard to resist not to list among the best!:

“Sullivan’s Travels” that deliberately or accidentally parallels with the novel of “Gulliver’s Travels” by “Jonathan Swift”, written and directed by “Preston Sturges”, are both satires of then the 18th century of England and Europe, and in the film the 1940’s of America, still struggling with the great depression and at the verge of the second world war. While the “Gulliver’s Travels” is more in a fantasy format, “Sullivan’s Travels” while in a way fantasy and fairy-tale like, is principally a realistic comedy-melodrama-action. The novel and the film both infuriate and disturb the societies of their own time in a very simple, readable and watchable manner, being read and watched by millions and liked by all.

A film that at the first glance, specially a critical mind, could hardly be placed among the greatest films of all time, and in the same rank among the other great films of its year, “The Grapes of Wrath”, “Citizen Kane”, and “How green was my valley”, it easily wins the minds and hearts of the hardest critics. The film, perhaps the first and one of the rare pictures of all time to be a multi-genre, mixes comedy with realism drama, romance and action-thriller in a satirical and meanwhile fantasy type. Although it has been said that Sturges wrote the script in response to some other comedies that sacrificed fun for message, cleverly achieves both fun and conveying its satirical message of then American society.

The film that was about to be declined the approval of US censorship office for its realistic portray of the American Society, specially the situation in the prison camp and mistreating the prisoners, was not either received well at the box office and by the critics. The Hollywood Reporter mocked it “Laughter is the thing people want, not social studies”. The New Yorker reviewed it as “anyone can make a mistake, Preston Sturges, even. The mistake in question is a pretentious number called Sullivan’s Travels.” But the Times, New York Times and the National Board of Review named the film one of the best of the year. The film has become more and more appreciated as time passed on and while it was not included in the list of the 100 best American films of all time in its AFI 1998 edition, it was listed on its second edition of 2007 as ranking 61.

In closing remarks “Sullivan’s Travels” one more time will be redefined based on the following criteria: