It is perhaps true that a great film could be recognized in its first few minutes, unlike mediocre films that one needs to wait long until something significant happens. This is the case with “The life and death of colonel Blimp”,written, produced and directed jointly by Michael Powel and Emeric Pressburger of England that until then, nothing major had been released out of that country. Perhaps the second world war needed a trigger to start off good filmmaking, but this time the film is not only a romantic drama or action, but more a satirical comedy. This film became a prototype and a gold standard of its own genre, satirical war films, so many adaptations in different formats such as “MASH” were released in later years on the sliver screen. 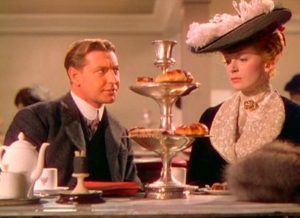 The title of the film is derived from the “Colonel Blimp” character of the English political cartoonist, David Low, though the film’s content is different and original. Based on Blimp’s character that is pompous, irascible and briefly stereotypically British, satires the empire’s turn of the century military ambitious expansions. The transformation of the Blimp character to Cilve Candy (played by Roger Livesey) in a more realistic and humanized form to represent the British military royalty and patriotism across three wars of Boer in South Africa in the very early century, then the first and later on the second world war, provides the film with almost three hours of analyzing all through the life of a soldier who evolves to a leading army general. The opening of the film on a typewriter, typing delivery of beer to an army camp, then the fast tracked action comedy scene after of a group of soldiers riding their motorbikes, but on the way, each taking a different forks on the road, and finally one of them is tripped over at the entrance of the camp by guards, all as a joke, is a great introduction to the viewers of what the film is all about. The fast paced funny soundtrack of the film adds more flavor to the films and prepares the audience for a comedy never seen before up to this point. In fact the film was quite ahead of its time as the modern viewers would never guess that the film was made in 1943 in the middle of WWII, but would think of it as a film of 60’s at least. This is not only because the film was made in Technicolor while other contemporary films were still coming out in black and white, but because of its story and plot development, its satire, action and all beautifully being portrayed on the screen that is still awe inspiring! One of the soldiers on the motorbike arrives in the commanding station of the camp, that is in a stable and reads an order from the head command to the head of the camp. Lieutenant Spud Wilson that “the war starts at midnight, and to take it as a real thing”! Then Spud in a short dialogue with his main officer, figures out that ‘take it as a real thing” would mean to start the war earlier than what is planned to, so they decide to start it at 6. The soldiers then ask why to start the war before it is declared, and the commander responds like “Pearl Harbor”, a satire to Americans who waited until being attacked by the Japanese to engage in the war. On the way to the head command with his troop, the captain stops at a motel to have a date with Mata Hari (the name after a Dutch exotic dancer and a German spy in WWI who was executed in France, but in fact here she is Spud’s fiancé).

While the troop are waiting outside for the Lieutenant, they notice a lady officer runs out, who was in fact Mata Hari, jumping in one of their army vehicle and driving away. The soldiers then find their commander knocked and passed out on the floor upstairs. Then in a chase after Mata Hari, or his fiancé, the troop enters the head command center, asking for Major General Clive Candy (played by Roger Livesey) and were led to a Turkish bath where the general was sleeping in a corner. Then in an argument between Spud and the general after being waken up, about starting the war earlier than midnight, the two gets into a wrestling fight and end up in a pool. While the general angry at the young officer and keeps saying that when he was 40 years younger like him, he was not like that, he swims out of the pool in his forty years younger time, at the time of Boer war in South Africa. 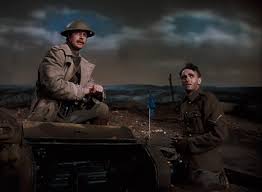 In a nice flashback in time, the film shows how general Candy as a young officer progressed to become a general in the British army. He takes on the risk in early 20th century to go to Berlin and spy on Germany’s already ambitious plan towards the first world war for hegemony in Europe. But the film is not only anti-German, but satirically criticizes Britain for the cause of the Boer war in South Africa and casualties including of thousands women and children, on the path to the pursuit for gold and diamond by the commercial empire. While in Berlin, Candy meets in bar and café with a young British girl, Edith Hunter (played by Deborah Kerr) who has invited him to Berlin for gathering information about a German officer named Kaunitz who was spreading anti-British propaganda and also to find out about the Germany’s ambitious war plans in Europe. Candy insults Kaunitz in front of all his comrades who all takes his insult not personal but to the whole German’s army and the empire. So he is invited to a duel with a representative of the German imperial army, a stranger to him first (Theo Schuldorff), that the film reveals and stresses here, to remind us of the wars that are created by the head of the governments, but fought by ordinary people or soldiers who have no animosity to each other. 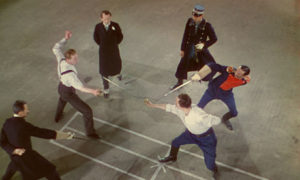 In the next scene, Candy Schuldorff are shown in a nursing home, both wounded, then visited by Edith Hunger and Schuldorff’s girlfriend, who soon all becoming friends, drink, smoke and play cards. From here, the fate of Clive Candy turns around as Edith Hunger gets attracted to Schuldorff who is ready to marry her, but to his surprise, Candy would not get upset and in fact the friendship of both officers endures. During the first world war, Candy now a general runs into another nurse girl with a a striking resemblance to Hunger, named Barbara Wynne (again played by Deborah Kerr) and this time marries her, despite 20 years age difference. Later on Candy cracks down Theo at a prisoner war camp in England, and after a brief bitterness on the part of Theo, unhappy about the ending of the war against Germany, their friendship continues beyond the conclusion of the war. 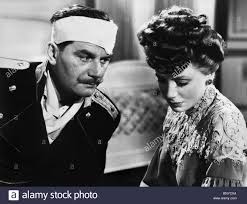 During the last trilogy war part of the second world war, Theo whose wife, Hunger is already deceased and his two children have estranged him by joining the Nazis, attempt to immigrate to England, that is not first accepted, but then through the assistance of Candy, remains in England. Now while Candy’s wife, Barbara has died as well, the relationship of the two old time soldiers of opposite lines remains on even beyond their love lives. Here Clive reveals to Theo that he always loved Hunger and has been following her resemblance that he found in Barbara, Surprisingly the soul of Edith Hunger, continues living in another body, a young female soldier, the personal chauffeur of general Candy, Angela “Johnny” Cannon (played again by Deborah Kerr). The films has now come to a full circle and ends where starts, and we find out that this young girl is nobody but Mata Hari, the fiancé of lieutenant Spud, who like the youth of Candy has patriotic ambition and dedication.

While Candy and Schuldorff play three different ages in three different wars, Deborrah Kerr plays three different ladies roles, as Edith Hunter, Mrs. Cany’s wife, Barbara Wynee, and at the end as Angle “Johnny” Cannon, or Mata Hari, the young female soldier driver. The efforts in make up, costume and set designs (for example re-creating the war torn France) have not just been original, but heroic and awe inspiring for years to come. Moreover the optimum application of the Technicolor in the film, one of the early best, makes it still to this day a pleasure to watch and be surprised of its making in 1943, right in the middle of the war in a country under air raids of Nazis.

The film at the time of the war at least by the British, specially the officials and the prime minister, Winston Churchill expected to be a propaganda for the allies and against German. But in fact it was focusing more on the human nature of any war, the human relationship and their sufferings than any glory or acquisitions that would be more the goals of the heads of any governments. The human relationships even between the enemies, portrayed well over time between Clive Candy and the German Theo Schuldorff is a centerpiece of the film that was not liked by some such as Winston Churchill who asked the film to be banned. More importantly the human character of Clive Candy as a dedicated and patriotic soldier fighting for his country at any rate or any date, in personal and across his life span is of loneliness and losses, most importantly of his love for Edit Hunger. His initial attraction to Edith Hunter that turns to love, is sacrificed for the friendship with Schuldorff to whom he married. Later on her love is still haunting Candy to pursue it and find in in the love with Barbara Wynne who strikingly resembles her. At the last chapter of the film, when his wife is already dead, the ghost of Hunger reappears in the body of Angles “Johnny” Cannon, as Candy’s personal chauffeur. In closing remarks “The life and death of Colonel Blimp” one more time will be redefined based on the following criteria: