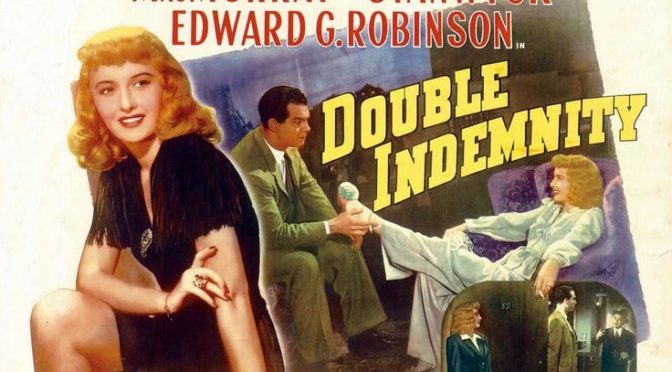 “Double indemnity” of Billy Wilder based on a year before novel of the same name by James Cain, has set a gold standard and prototype of a genre of mystery murder plot thriller, that followed by many alike such as Alfred Hitchcock’s “Dial M for Murder”(1954), “Diaboloique” of Henri-Georges Clouzot (1955), “Empire of passion” of Nagisa Oshima (1978) “The postman always rings twice” of Bob Rafelson (1981), “Basic instinct” of Paul Verhoeven (1992), “Fatal instinct” of Carl Reiner (1993), and finally the most recent “Gone Girl” of David Fincher (2014) among many more.

The film which was nominated for seven academy awards and received none, has at least been hailed by the critics from its first release and by AFI ranking it 38 in its first 1998 release of the 100 greatest American films and ranking it 29 on its second edition of 2007. The film not only boasts a genre prototype, but great acting of all the three main characters, of Walter Neff played by Fred MacMurray, Phyllis Dietrichson played by Barbara Stanwyck, and Barton Keyes played by Edward G. Robinson, and set another high standard for acting. The film also depicts the best earliest flashback opening scene in the history of cinema, by showing Walter an insurance salesman, returning to his office late at night, being shot and in pain, dictating his story of what had happened earlier into a Dictaphone. 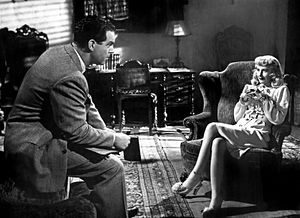 The Gold Standard of a genre:

The film from its inception and over years has become a gold standard of the genre mystery, murder and thriller, specially depicting the main protagonists not as heroes but villains. As the story from the start unfolds, we learn that Walter caught up by greed and fatal attraction of Phyllis, a married young and beautiful woman to plot her husband’s accidental murder, to master and steel the double indemnity clause and money in his life insurance. With quite a few twists and perfect plot, the husband is killed and his body laid on the train truck, like he has fallen from the train while on a trip. But Barton Keyes a brilliant and veteran claim adjuster, played amazingly by Edward G. Robinson, would not accept the death as suicide and accidental for many reasons according to his experience, such as slow-moving train, and with his “little man” that is his instinct in his belly starting to suspect a murder. 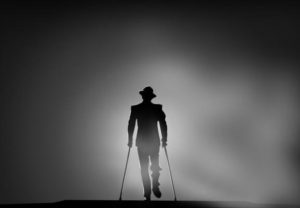 Adding to the worries and panic of the murdering couple, is the victim’s daughter, Lola (Jean Heather) who is convinced his father has been murdered by her stepmother and her lover, whom she does not know to be Walter. Moreover there is a witness on the train who has seen the victim to be much younger than the victim, seeing and talking briefly to him off the observation deck of the train, before his alleged fall (Walter pretending to be Phyllis’ husband by having a broken leg and carrying a clutch). 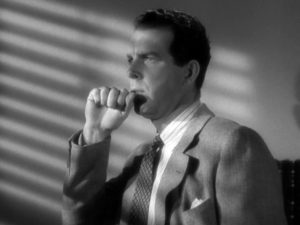 The film continues with its twists and surprises in this classic murder mystery, as Barton rejects the claim and cleverly forces Phyllis who is now the most eager and greedy to pursue the case as a sue against the insurance company in the court. Hence he is trying to trap her and her murder associate, while yet not knowing to be his own close colleague, Walter who tries hard to change Phyllis mind. Finally Lola breaks up to Walter that her hotheaded boyfriend, Nino (Byron Barr) is in an affair with Phyllis behind his back. While upset, Walter sees the disclosed equation as perhaps a way out for him, as Barton becomes suspicious of Nino as the accomplice in the murder. Here with more twist and surprise, Walter tries to kill Phyllis and cast the second murder suspicion on Nino as well, so getting rid of his only witness and associate in the crime. But Phyllis is ahead of him in plotting and ready with a gun in her hands, shooting him in the shoulder. Surprised and wounded, Walter dares her to shoot again and finish her job, when Phyllis realizes and states that she cannot, as she is still in love with him. Walter not believing in her, grabs the gun from her and shoots her to death, saying “Goodbye baby”!

Back to the opening scene, while Walter is dictating the story in confession into the Dictaphone at his office desk, Barton arrives unnoticed and overhears the whole story. Then he tells him “Walter, you’re all washed up”, that Walter tells him, he prefers escaping to Mexico than facing the gas chamber. But shortly Walter falls on the floor from blood loss, before he can reach the elevator. Here Walter tells Barton, the reason he could not figure out the case, was because the guy was “too close, right across the desk from you”, that Barton replies “closer than that, Walter.” In the last moment, Barton lights a cigar for Walter, who had the habit of lighting cigarettes for him throughout the film, while waiting the arrival of the police and ambulance. 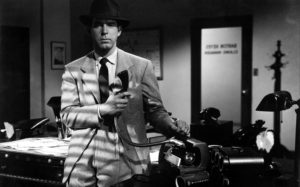 The novel that was based on a true such story of Ruth Snyder of New York, who persuaded her boyfriend to kill her husband for his double indemnity clause life insurance, was sent to different Hollywood studios and was quickly purchased by Paramount pictures. Cane’s previous novel “The Postman always rings twice” had been a similar murder and passion story and had been well received. Although the novel was quite intriguing, but to translate it onto the screen, Billy Wilder needed the writer, Raymond Chandler to write it up again with less lengthy dialogues, more effective short screen dialogues, and above all more visual imagery to add to the mystery and thrilling of the plot. The screen adaptation was so well done and received, that even Cain himself was very pleased with the way his book turned out on the screen, and after seeing the film half a dozen times he was quoted as saying, “… It’s the only picture I ever saw made from my books that had things in it I wish I had thought of. Wilder’s ending was much better than my ending, and his device for letting the guy tell the story by taking out the office dictating machine – I would have done it if I had thought of it.” 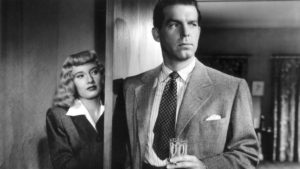 The film with its two main protagonists depicting negative roles as criminals, was first hard for Barbara Stanwyck and Fred MacMurray the highest paid actors in Hollywood at the time who always played positive and heroic and good roles to accept such. But at the end these two stars in a fit collaboration, marked a stage of acting in cinema for years to come, that the protagonists do not need necessarily to be good and heroes. Another major factor of achievement of the film was its cinematography by John Seitz who applied German expressionism with dramatic deployment of light and shadows, strange angles, making the scenes dark, gloomy with dusty and rotten interiors to provide a sense of lurks beneath the façade, giving the impression of the true nature of the characters as villains.

The “venetian blind” lighting effect that Seitz applied in the background of Walter image, giving an illusion of trapped behind the prison bars, became a standard in cinematography. The set design by Hal Pereira, specially showing for the first time rows of colorless and lifeless corporate desks in the insurance office, a reminder of what American capitalism becoming, is another achievement of the film beyond its gripping story and acting. The show of Phyllis deliberately with her blonde wig to look sleazy and seducer different than her other film roles, was another thoughtful improvisation in the film. Lastly and not the least the music score of the film by Miklos Rozsa, despite being first criticized harshly by the Paramount’s musical director as unfit, it was well received by the time the film was previewed that all were astounded, for being dissonant and hard-hitting, adding more spice to the crime thriller of the film milieu. 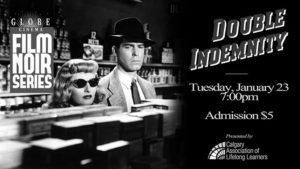 The initial reception of the film despite its amoralistic, negative and disturbing content for the era, was amazing and unexpected. The film equally was praised by the audience and the critics, specially for setting a new standard for screen adaptation, and breaking the regular delicacy of Hollywood at the time with its sharp, dark and devilish portray of human greedy nature beyond the normal and innocent façade. Hitchcock who perhaps wished to have directed the film, later on wrote to Wilder “Since Double Indemnity, the two most important words in motion pictures are ‘Billy’ and ‘Wilder’”. In short, “Double Indemnity” has set not the standard for “film noir” of its era, but for many other genres of mystery, murder, thriller and a love-lust-greed relationship kind of story that ends up in a Shakespearian type of fate! 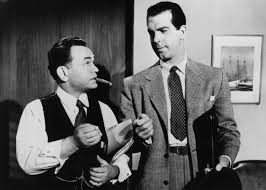 In closing remarks “Double indemnity” one more time will be redefined based on the following criteria: