“Invasion of the Body Snatchers” is a prototype of all the science fiction, horror and thriller films singularly or in combination that came afterwards years later, such as “The Blob”, “Alien”, “Aliens”, “The Fly”, “The Thing”, “Predators” and more. While “The Cabinet of Dr. Caligari” of 1920 has been the prototype of all horror films, “Invasion of the Body Snatchers” is a nice blend of science fiction, horror and even thriller of the modern time style, made 62 years ago. Directed by Don Siegel who created the Dirty Harry series and made Clint Eastwood popular in cop action films other than the spaghetti westerns of Sergio Leone, the film has no super stars, though well enough acted. Shot in a perfect black and white of film noir style, to convey more horror and thrills, while the color of all brands were in fashion already in 1950’s, the cinematography of Ellsworth Fredericks and most of all the music score of Carmen Dragon makes the film a classic so much that still horrifies and thrills today’s audience. 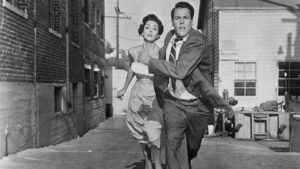 The story that was adapted from Jack Finney’s science fiction novel of 1954, “The Body Snatchers”, by Daniel Mainwaring into the script, is about an extraterrestrial invasion of the fictional town of Santa Mira in California. The film has its own twist and does not start with an obvious invasion, and takes the audience alike the protagonists, particularly the main one, Dr. Miles Bennel, the town GP, through a mysterious puzzle to solve and explain the sudden strange change of the locals’ behaviours. A woman visited by the doctor, claims his uncle with whom she lives is not real, but an impostor and a boy in fright runs away from his mother on the street, almost hit by the doctor’s car.  Later on more than half way through the film, we learn that the change of people becoming impostor and emotionless is an extraterrestrial invasion plan and attack. The real humans are duplicated by the spores that had been dropped down earlier onto the nearby farms, and un-earthy impostor copies would burst out of the huge seed pods. Another example of popular cinematic art:

Like “Roman Holiday”, a popular box office delight that could reach artistic level and please lay audience and critics alike, and rank among the greatest films of all time in our list, “Invasion of the Body Snatchers” as well is a popular and box office hit that did the same as a prototype of science fiction horror and thriller film. Achieving this is not done with the content of the story or by much of special effects or huge spending, but by the power of story telling and showing on the screen. The film in fact is more of a thriller and mystery discovery than a horror and even science fiction. The thrill of the mystery solving of the locals, who one after another changing in behavior, creates a mass hysteria in the whole town, to be solved in the lead by Miles and his  girlfriend, Becky (Dana Wynter).

The film opens up with a nice flashback when Dr. Miles is brought to an emergency room of a hospital as a patient, screaming in fright telling the story of the invasion to a psychiatrist. The whole film from now on runs in his flashback telling the story and ends back in the ER, when he was still thought to be delusional until the attending psychiatrist notices a truckload of seed pods wheeled into the hospital by an injured driver. He calls the police to barricade all the roads and informs the FBI and the film ends there. The process of the story in the script, the superscope black and white cinematography and above all the music score have made the film still a thriller and horror, bringing the viewers even to this day on the edge of their seats, excited and frightened. 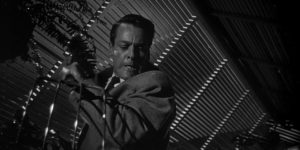 As it was said, the film is an example of a popular or commercial film that reaches artistic level, by its power of delivery, not only imposing thrill and terror, but philosophical and political meanings that was or was implicit and not quite explicit in the film. The change of the personas of the locals into something different and possession of their bodies and minds, was quite taken by many critics as allusion to the communist witch hunt of McCarthyism or even oppositely, the infiltration of communist ideology into the American minds. This is the power of a film as an art format that could affect ordinary people and intellectuals alike more than any other art format. The film’s influence of the American culture was also so much to create the slang expression of “pod people” rooting and referring to the emotionless duplicate people in the film.

The film while was ignored by the critics of the time, has been ranked one of the best films ever made in general, or in the science fiction, horror and thriller genres by Filmsite.org, Rotten Tomatoes, Chicago Reader, Time Out, American Film Institute, Bravo’s, Chicago Film Critics Association and Time magazine among many. “Invasion of the Body Snatchers” has also been selected in 1994 for preservation in the United States National Film Registry by the Library of Congress as being “culturally, historically, or aesthetically significant”.

In closing remarks “Invasion of the Body Snatchers” one more time will be redefined based on the following criteria: