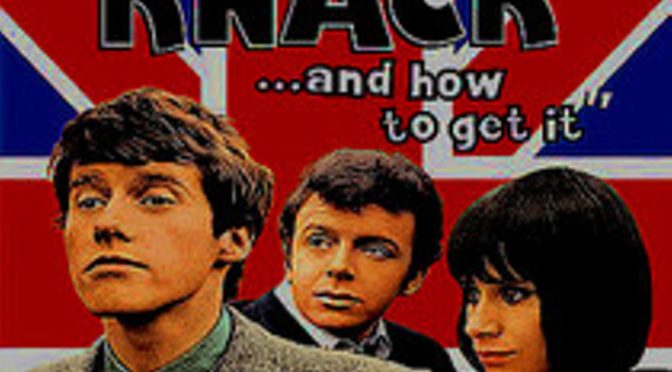 In the mid 1960’s when Italian and French Avant Garde cinema falls too deep in the crack of self-absorbent intellectualism with Antonioni following Godard-type film of “Blow Up” in 1966 and Godard making another failed cinematic experiment with “Pierrot le fou”, a novel masterpiece comes out of England. Richard Lester an American living in England hands on film experiment late in his life for the first time at age 27 with a sketch comedy short film “The Running Jumping & Standing Still Film” in 1959co-directed with Peter Sellers. He goes back to the basic and moving pictures that was silent films and experiments and learns it as it started. This 11 minutes short film experiment attracts the Beatles at the time who hired Lester to direct their film “A Hard Day’s Night” in 1964 and after “The Knack…and how to get it” (“The Knack” for short from now on in this article), their second musical film “Help” in the same year of 1965. 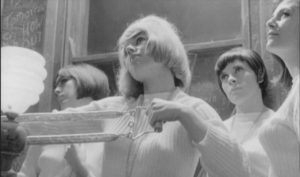 Lester innovates and introduces a comedy/farce film style with “The Knack” that will be adapted by most British and American comedy filmmaker in later years. After making a few other alike, e.g. “A funny thing happened on the way to the Forum” in 1966 and “How I won the war” starring John Lennon in 1967, from early 70’s he turns into adventure film making “The Three Musketeers” in 1973, “Juggernaut” and “The Four Musketeers” in 1974 until in early 80’s when he gets into making “Superman II” in 1980, later “Superman III” in 1983, then back to “The Return of Musketeers” in 1989, before his final film, a return to the Beatles with “Get Back” in 1991 filming Paul McCartney’s concert tour of 1989-1990. 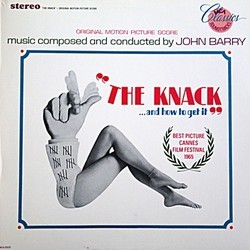 Knack and how to invent it

The film is itself a “Knack”, a skill and talent that Lester showed to own it in many of his films from the two films made for the Beatles to a few other innovative comedy like “The Knack” to his later adventure and other genre films. In “The Knack” the avant garde cinema of Godard and Antonioni is mixed well with art of silent filmography, Russian-style camera work, cinematography and editing to create an innovative intellectual farce comedy. Hope and fantasy in exaggeration all the way in between the hours of reality in daily life is depicted from the start to finish. Colin (Michael Crawfors), a bachelor clumsy in the art of attracting women, in jealousy of his friend and housemate, Tolen (Ray Brooks) a womanizer, daydreams in his imagination, a line full of young girls waiting on their staircase for what seems to be fashion models audition to be tempted and used by Tolen upstairs, while he is in despair of having only one.

The film starts with a slab comedy style of silent era like Chaplin’s in the above opening scene and later with the scenes of the people rushing down off a bus , picking up their newspapers and digest books, while Nancy (Rita Tushingham), a young woman off the bus trying to put her luggage in a locker and closes it in the bus station, but the locker’s door keeps opening. This style of farce slab comedy continues when Nancy takes self portrait photos in a photo booth, when another woman with her man getting in and starts undressing behind the curtain and passing on her clothes including her undergarments piece by piece to the man and taking nude photos. 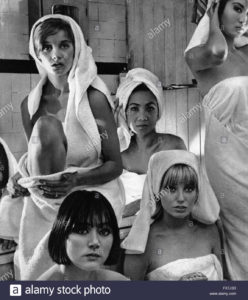 Nancy looking for YWCA, passing under the shower room of what seems to be YMCA and asking a few men drying themselves after shower the YWCA’s address. Meanwhile the intellectual comedy kicks in when Colin teaches a group of young boys in a classroom, that “the angel of incidence is equal to the angle of reflection” and “the side of incidence divided by the side of reflection is constance”! While the teacher teaching, the boys in the classroom have their eyes fixated on the girls playing outside while a row of older pervert men watching the girls behind the schoolyard fence, that Colin surprisingly notices himself among them.

Nancy looking to purchase a dress in a ladies department store, when a salesman is pushing the sale of dresses to women by telling the same seducing them the same words. Back to Colin, he still in desperation of having a girlfriend, seeks the advice of Tolen who suggests him to eat good food, specially proteins like steaks, while double messaging that “ with intuition, the man can develop the knack”! Meanwhile Nancy looking for YWCA tries to cross a traffic busy street, but no one allows her until she puts in a package in the belly under her coat, pretending to be pregnant that stops the traffic and a male driver gets off and walks her across. But the man loses his car as the traffic moves and pushes his car with it, while Nancy discloses to him her fake pregnancy. 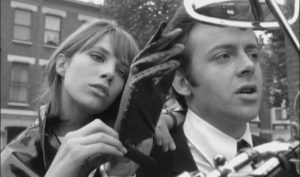 In the apartment, Colin blocks his apartment door by nailing a board to Tom (Donal Donnelly) who is moving in and not willing to share any potential woman come around with him. But after finishing his hard job, he realizes in surprise that he himself cannot get out and in and breaks up the lock bar. Colin purchases a big bed for him and his future girlfriend. While Colin receives the bed descending from a crane belt at a harbor when Tom helping him, Nancy still looking for YWCA arrives to the scene, and all start carrying the bed on its wheels on the streets of London to Colin’s apartment.

As soon as they arrive home and Tolen casts eyes on Nancy, seduces her and takes her away on is motorcycle. Colin already attracted to Nancy, hoping finally to have found a potential mate, he and Tom running after them, chasing the motorbike. The result is a couple of cat and mouse chase scenes, comic and innovative, like when the bike passes through a narrow alley under Colin who’s up on the wall horizontally, and when their feet get stuck in a fresh asphalt. What Antonioni tried but couldn’t fully achieve in his “Blow Up”, Lester does in the park scene when Tolen attempts to seduce Nancy in a blow up (zoom) and fast editing shots. Nancy after passing out for a moment, wakes up in frenzy, suspecting to have been raped, walks around in haze, shouting that she has been raped. When she knocks on a door, telling the lady of the house that she has been raped, the lady taking her as a salesperson answers “not today”!

Now all, the three men and Nancy in Colin’s apartment, discuss the raping accusation that did not happen. Tom tells Tolen that perhaps Nancy having the fantasy of being raped that in fact means “She wants to be raped, so go rape her”! But meanwhile Nancy accuses Colin of the rape and analyzes his true personality as devilish and perverse behind his teacher’s exterior. While Tolen still attempts to seduce Nancy by coming between them, she is already attracted to the malice nature of Colin and moves towards him. At the end, in the final scene, Colin walks away hand in hand with Nancy under the fireworks and the voiceover comments of people around, who throughout the film comment on the youngster protagonists behavior.

In summary “The Knack” brings in an innovative comedy farce film that will be British for a while until adapted by others across the world, mixing slab comedy of the silent era that also gets in a new life in the later years British comedies. All these were achieved by the genuine of Richard Lester who mixes up the intellectual avant garde of the 60’s through daydreaming fantasy and exaggeration with his farce slab comedy. The film goal was achieved well by a camera work in angles and cinematography of David Watkin reminiscent of Russian masters in well thought set and location designs, and finally the well fit music score of John Barry. While nominated of Best film, screenplay, actress, cinematography and best newcomer director at the British Academy Film Awards, the film did not please the English film circle, but deservedly it won the Palme d’Or at Cannes Film Festival, the Writers’ Guild of Great Britian and The Belgian Film Critics Association.

In closing remarks “The Knack…and how to get it” one more time will be redefined based on the following criteria: