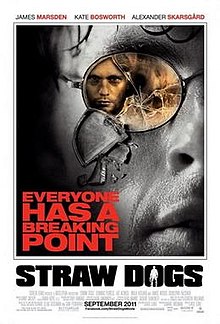 A film that broke so many standards of Hollywood at the time and still to this day remaining controversial and degraded by some critics, who called its director Sam Peckinpah, “Bloody Sam” is a major breakthrough in the cinematic history. While the more accredited Stanley Kubrick in the same year of 1971, made “A Clockwork Orange” depicting uncalled and unusual violence and abuse towards ordinary people by psychopaths, “Straw Dogs” portrays the real and usual violence that could be seen all around us even to this very day. The subject of racism, hatred, defensive animosity to un-likes, invasion of privacy, bullying, abuse and rape, that all depicted well in the film was not in the imagination of Peckinpah to like or dislike, but it was and it is a simple reflection of a bitter reality in the western society. 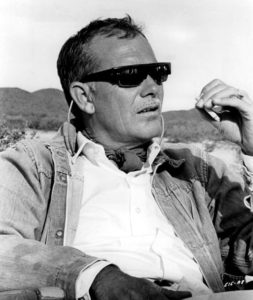 With a brief career and life (died at age 59), Peckinpah created such novel cinematic great works such as “Ride the High Country”, “Noon Wine”, “The Wild Bunch”, “Junior Bonner”, “The Gateway”, “Bring me the head of Alfredo Garcia”, “Cross of Iron”, and his masterpiece “Straw Dogs”. The sheer and ruthless violence that Peckinpah introduced to the screen, shocked many and led to dislike and controversy of his films for shaking the moralistic standards of the time, that nowadays already a reality of the screen too and seen all over even on television and children’s films. It took the American society decades to adapt to such depiction of the reality of violence in their land of freedom and brave! The present portray of violence on the screen is empty without any background ideology, interpretation or enlightening, but sheer violence for the sake of entertainment, that in fact desensitize the viewers to such behaviours. Similar violence in the defense of invasion to our privacy in the family films such as “Home Alone” that now makes us laugh without any moral or judgmental surprise, all started with Peckinpah and his films such as “Straw Dogs”, but with an underlying meaning and enlightenment that many unfortunately did not grasp at the time. 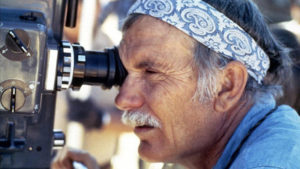 Peckinpah serving in the second world war as a marine in the occupied China by Japan and witnessing the war violence, while traumatized and drawn to alcohol and drug use, used his gifted talent of creating great films to depict such societal violence. But instead of making war films where the violence could be justified, he portrayed the violence of the everyday life in the western society. He stepped deeper and analyzed the roots of violence that’s hatred, discrimination, racism, masculinity and in the land of freedom, anarchism. These all were shown at once beautifully in “Straw Dogs”, where he also showed bravery even out of superficial cowardice, through protection of the honor and righteousness in one’s hands when the society and its law are incapable of such. With his unique talent in visual and cinematic techniques and bringing out the best performances of the actors, Peckinpah and “Straw Dogs” have become a landmark not only in the American but the world cinema. 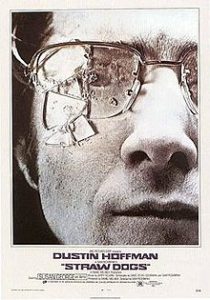 The film starts its title credits in black and white with a blurry background that will reveal to be a color film, as there will be bloodshed and better in color. An American mathematician David (Dustin Hoffman) with his British gorgeous wife Amy (Susan George) move to a small English town where Amy was raised to write his new research book. From the outset, the couple are welcome as strangers with contempt. Charlie, the head of a group of local men who has dated Amy in the past is all over her from the start while the husband David is a subject of ridicule and mockery for being an educated American coward and a quiet geek. Charlie offers fixing the roof of a building in their house where they will be staying with his local gang, as a plan to be close to Amy and cause the couple trouble from the first day of their arrival.

Tom, Charlie’s uncle who’s seen always at the local bar drinking is the old root of masculinity in this small town. Each time David walks to the bar to buy cigarettes or have a drink, the intimidation, bullying and unwelcoming is felt in the air, orchestrated by Tom, Charlie and the other local men. Amy who’s already neglected by David who’s busy with his writing work, after trying to get his attention and is rejected, starts provoking the men working on their roof. One day while getting off the car, she exposes her bare thighs and underwear, and another day she shows herself topless through the bedroom window. Hereby the film not only addressing the small town prejudiced mentality, but the schism between the couple Amy and David, inflamed by the local outsiders. 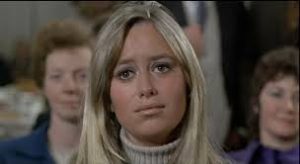 Peckinpah thoughtfully probes into the psychology of the couple’s relationship that’s close and loving, but split by their mismatch characters of an intellectual geek and coward looking, against an ordinary beautiful young femme fatale seeking intimacy and excitement. Later on we see the rejection of her affectionate needs by David, boils the ambivalence in Amy, with a flashback to her past relationship with Charlie that were apparently fulfilled. All these are depicted masterfully barely in words, but visually in a novel cinematic experiment that Peckinpah achieved. 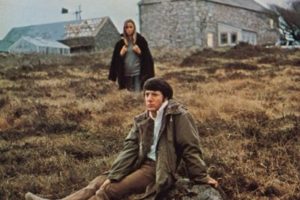 The first warning sign of terror and bullying of the local men against the newcomers is the discovery of Amy’s kitty hanging dead in their bedroom’s closet one evening by David. Amy interprets that as sign by Charlie and his men to David that they can easily get into his bedroom.  She wants him to go and question them about their missing kitty, the next morning, but he refuses like a coward that he has been thus far. When the next day, the men help to bring David’s big iron trap into the house, Amy arrives to the scene with a tray full of beer glasses and a bowl of milk as a reminder to them of the missing kitty. But that again does not prompt David to question the guys about the cat.

David is invited by the men to a hunting trip the next day deliberately to leave him behind on the field and get to his wife and their bedroom. While he is left alone on the hunting field, in watch for the prey ducks, Charlie gets into their house that Amy opens the door and lets him in, offering him a drink with the hope to question him about their dead kitty. In the first climax of the film that disgusted many at the time, Charlie rapes Amy who at the start resists in tears, but then due to her ambivalence and need of intimacy seems to be giving in by hugging and kissing her perpetrator. The tragedy and trauma for the victim and the viewers at the time is the arrival of another guy, Norman to the scene from behind at the gun point threat to Charlie who has to push Amy down for another forceful rape. Unlike the films of nowadays and the popularity of Peckinpah at the time for showing such ruthless scenes, there is not much nudity or any detailed depiction of this raping sequence. What the viewers see and gravely disturbed is mostly the look on the face of the Amy as the victim that performed to the perfection. 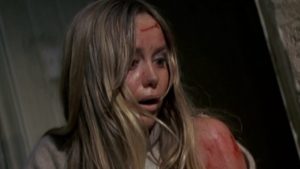 David walks home after a long wait in the field when nobody shows up. Not knowing what happened in his absence at home and to his wife, he finds Amy lying in bed. Once again she raises the issue of the kitty and why he did not question the men about it in tears and protest, calling him coward. David in defense and proof of not being a coward, faces the workers the very next day who were still working on the roof and fires them all. The evening after when the whole town invited to a party organized by the church minister, Amy is seen all disturbed, \ receiving flashbacks of her traumatic experience when ran into her perpetrators. In the next turning point of the film, Janice a seductive teenager, the daughter of Tom who always flirts with Henry, a tall big retard man, takes him for a walk outside. In a barn, she forces him to kiss her, but when Henry hearing the voices of people looking for Janice, after someone reported them leaving the party together, he holds her so hard in order not to let her go that chokes her and she falls on the ground dead. 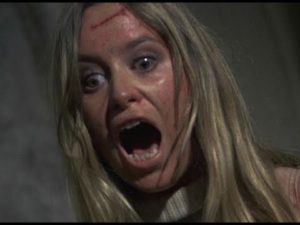 David and Amy who have already left the party due to the disturbance of facing her rapists, on the road in the dark, their car hit Henry who’s on the run. They take him home not knowing of what has just happened. In another and final climax of the film that takes quite long, the gang finding out of the hideout of Henry, still looking for missing Janice, arrives at the Amy and David’s house. David lets them in, but refuses taking Henry with them, as he believes he is innocent and not capable of hurting a fly. David asks the gang to leave and look for Janice elsewhere, until the sheriff, Major Scott arrives to the scene and takes things in the hands of law. But the all drunk bunch continue with their bullying and threatening behaviours outside the house. When the major arrives to the scene and is shot by Tom, the film enters its concluding high point.

Still not believing that David, as a coward being capable of defending them against the large group of the wild locals, Amy tries to open the door and let them in and taking Henry with them and end the havoc. But David in defending their house, honor and righteousness, he pushes Amy away and sets himself in defense and once for all to put an end to all the assault and bulling, yet not knowing of the rape incident. David all alone and despite his wife’s fear and willingness to help, stops the invaders one by one that ends in killing them all. In this final, disturbing for some and exciting for others who share the vengeance of David, the film marks a major cinematic breakthrough of violence, revenge in a very graphic bloodshed, that was all possible at the time from the master Peckinpah. From that moment on any similar violence and revenge in defense on the screen is owed to this film and to his creator, Sam Peckinpah. 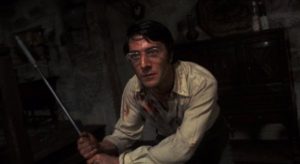 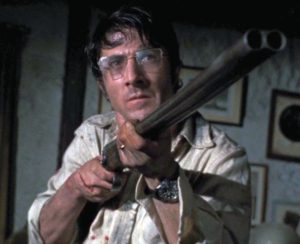 In closing remarks “Straw Dogs” one more time will be redefined based on the following criteria: 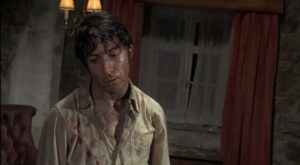