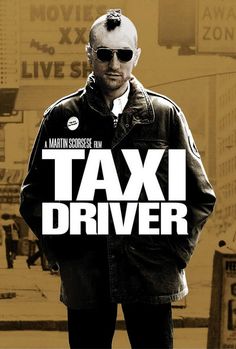 Martin Scorsese while starting filmmaking almost at the same time as Francis Ford Coppola, as an Italian American, he is more interested in social studies of the American society and metropolitan cities specially New York City. His first major feature, “Mean Streets” was a fair study of Italian American real street mobs, unlike the organized crime fable of the Godfather of Coppola. In his second major work, Taxi Driver, he takes us within the story of a taxi driver to the streets of the city that never sleeps, as he had lived in, observed and experienced it. 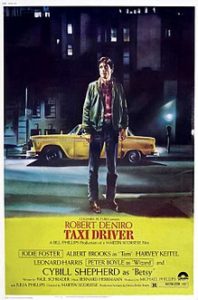 Travis (Robert De Niro) is an ex-marine who takes the job of taxi driving in the city as he cannot sleep like the big city itself, and perhaps to avoid his flashback nightmares of the war of Vietnam. The film like a documentary, take the viewers through the streets of New York City and the lives and behaviors of creatures of the night, the prostitutes, alcoholics, drug addicts, etc. We see the filth, the mess and the crimes in the city through Travis’ eyes who’s disgusted with all and wishes to be totally cleaned up. 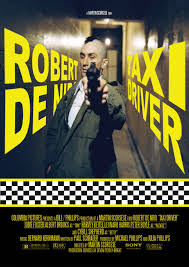 Scorsese takes a brief part in the film as well when one night, he rides Travis’ taxi. When he tells Travis that he’s going to kill his wife and his lover with a 44 magnum to rip them apart, in his unspoken mind runs the idea of cleaning up the city off the filth that way. So soon he buys his guns and starts training himself back to shape to actualize what he has been wishing for long. When he meets a gun dealer, instead of one, he buys all his guns in two brief cases. Soon he finds his first target, when on night the teenage prostitute, Iris (Jodi Foster) tries to run away from his pimp and gets into his taxi, but the pimp, Charles “Sport” Rain (Harvey Keitel) pulls her out. He starts following Iris in the following nights to spot her pimp again. He finally find Sport and pays him to be with Iris. To the surprise of Iris, he has no intention of having sex with her, but wants to rescue the runaway teen from all that mess and send her back home to her parents. He takes her out on a breakfast date the next morning when he encourages her to quit all that as she deserves more than prostitution and let a druggy pimp run her life. He even offers her money to go back home, but later on Sport continues fooling her that he needs and loves her so to stay and go on with selling her body for him. 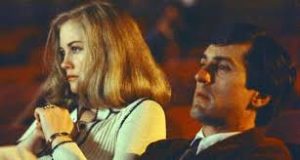 Meanwhile Travis who’s still determined to clean up the filthy streets off Charles and Palantine and alike, continues with his self training and shooting practices, shaves his hair into a Mohawk and is after killing Panatine first whom he sees a leader of all liars and also to take his frustration out of the rejection from Betsy. When he arrives at Palantine’s rally in the city one day with a huge crowd gathering, he who looks suspicious, is spotted by the security who chase him and he has to run away. Frustrated at his first attempt, he goes back to Sport the next evening and shoots him, his brothel’s male bouncer and Iris’ customer in a rampage, all in front of Iris who’s shocked and in tears. Finally a police officer arrives to the scene, but Travis is already down from a wound shot in his neck by Iris customer. 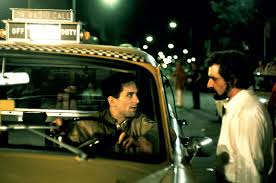 At the end of the film, Travis survives after coming back from a coma in a hospital and is recognized as a hero and appreciated by Iris’ parents who thank him in a letter for having their daughter rescued and returned home. In the final scene, back to driving his taxi, Travis encounters Betsy again one evening who rides with him and mentions that she has read about his heroism in the papers. While she looks willing to see him again, Travis shrugs her off and after dropping her off, drive away and the film ends. 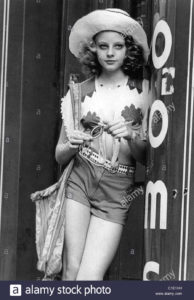 The script of the film was written by Paul Schrader from his own experience of wondering around at nights in the big city after his divorce and breaking up with his girlfriend, frequenting the porn theatres and witnessing the filth of the city at night. Schrader also took influence from the diaries of Arthur Bremer who shot the presidential candidate, George Wallace in 1972 and the existential novel of “Nausea” by Jean-Paul Sartre and John Ford’s film “The Searchers”. Complemented well by the mostly jazzy music score of Bernard Herrmann as his final score before his death on December 24, 1975, the film was dedicated to his memory. The cinematography of Michael Chapman also helped Scorsese to take his filming experience one step beyond his previous film, “Mean Streets”. Despite the film became a subject of controversy due to its depiction of violence and negative portray of the Big Apple that was at the time on the verge of bankruptcy and also for Jodi Foster being 12 years old at the time of filming, acting as a prostitute, “Taxi Driver” became an overnight hit by the audience and the critics.

Despite not winning anything at home from the Academy Awards or Golden Globes or even BAFTA, the film won “Palme d’Or” the most prestigious award by Cannes Film Festival, a rare occurrence for American films, and numerous awards around the world such as best foreign film at Hochi Film award, Blue Ribbon Award, and best foreign film direction at Kinema Junpo Award all from Japan, LAFCA award for the best actor, music and new generation award for Jodi Foster and Scorsese, , best acting, directing and supporting actress for Jodi Foster at NSFC Award, and best actor at NYFCC Award to name some. 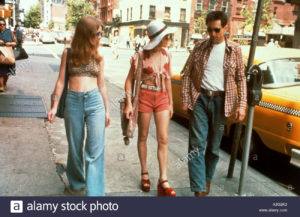 In closing remarks “Taxi Driver” one more time will be redefined based on the following criteria: