Mohsen Makhmalbaf, the creator of Kandahar started his filmmaking more independently than the rest of the new wave filmmakers in Iran who rose out of the Institute for the intellectual development of children and young adults. Makhmalbaf holding free and revolutionary ideology from his teens, spending 5 years in the Shah’s jails for stabbing a policeman and released only on the wake of the Islamic revolution, soon used camera to bring the bitter neorealism of the suppressed Iranian culture for thousands of years to the screen. His second film “Boycott” in 1985 exposed the dictatorship regime of Shah of Iran through depicting the story of a political activist being charged with death sentence only for his communist ideology. With his third feature “The Peddler”, Makhmalbaf reached a global level of audience and proved to have mastery over the visual art of cinema, and not being only an intellectual ideologist. With his artistic and thoughtful use of camera, beautiful and colorful cinematography, masterful editing and mix of proper music scores, Makhmalbaf became a world level master of cinema, specially with “The Cyclist”. Righteously he picked the ordinary and poor people in their struggles for survival in life as the common subjects of his films, and this way he showed well to the world the suppression of his people in Iran and their neighbor Afghanistan with their culture, and cry for freedom. Before his greatest masterpiece, Kandahar, Makhmalbaf from 1986 when he made “Boycott”, created one film almost every year, “The Peddler” in 1987, “the Cyclist” and “Marriage of the Blessed” in 1989, “the Nights of Zayande-rood” in 1990, “Time of Love” in 1991, “Once upon a time, Cinema” in 1992, “The Artist” in 1993, “Hello Cinema” in 1995, “A Moment of Innocence” and “Gabbeh” in 1996, “The Silence” in 1998, “Tales of Kish” in 1999, and “Tales of an Island” in 2000, and in between several short films. Unfortunately Makhmalbaf who fought the dictatorship of Shah with the hope of a democratic revolution, had to continue with his fight against another dictatorship that finally banned him of his enlightening filmmaking and forced him to flee his homeland like a gypsy refugee with his family, running from country to country, Afghanistan, Tajikstan, India and finally France where he could settle. Makhmalbaf is perhaps unique among all the great filmmakers in the world in producing three great filmmakers within his own small nuclear family, his two daughters Samira and Hana Makhmalbaf and his wife Marzieh Meshkini, all known to the global cinema.

Kandahar: A Journey to the Dark Ages

Kandahar or per its Persian’s title “A Journey to Kandahar” is the story of the journey of a young Afghan woman, Nafas (Nelofar Pazira) who had escaped Afghanistan years ago and now living safely in Canada as a journalist, is back to her war torn country to see her sister who has been left behind. Her sister who is now crippled by stepping on a mine has sent her a letter that she plans to commit suicide on her own behalf and the rest of women suffering in Afghanistan on the last solar eclipse of the millennium. Hence Nafas has only three days to reach her sister save her life, while the journey through a country ruled by Taliban, who treat women as a slave and material possession under cover of Burqa is almost impossible. Getting a ride from a Red cross helicopter, she lands at a refugee camp on the Iran-Afghanistan border with the plan to pass through and reach her sister in Kandahar. 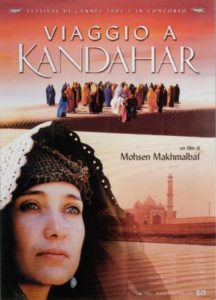 A long awaited film about Afghanistan in the early years of ruling by Taliban regime, Makhmalbaf’s camera takes the audience through an unbelievable journey that perhaps before this film, most of the world were unaware of the existence of such situation in any place on earth at the dawn of the second millennium. Elegantly and colorfully depicted like some of other Makhmalbaf’s previous films, we witness a nation that are taken back to the origin of Islam when the women have no face and are called “Black Heads”, and ordinary not rich men have several wives and many children, the girls are not allowed to have any education and no rights whatsoever, and the young boys are taught only religious studies to be “mullahs” or religious preachers. Nafas has to wear burqa and pretend to be one of the wives of an old man to be able to ride with them on a small truck and passing through the border to Afghanistan and Kandahar. The women and children including Nafas are loaded on the trunk of the truck like a herd of animals. After driving some distance in the mountainous desert of Afghanistan, the family were robbed from all their belongings by the truck driver and were left behind in the desert to walk. The man of the family decides to return back to the Iranian border as he is frightened of his and his family lives passing through his own country of Afghanistan. Nafas who is serious to continue with her journey in spite of all the danger, finds a young boy who earlier in the film has been shown being kicked out of a religious school for his inability to sing Koran’s verse.

Recording her journey on a tape recorder, Nafas tells her observations to her sister and us the viewers. On their walk journey with the young boy guide, “Khak” they witness a skeleton that frightens Nafas who runs away, while Khak takes off its eye socket and wants to sell it to her for five dollars. Along the road, they witness several women totally covered with no face sitting by a well washing their clothes. Arriving in a village where at the center there is a cockfight, a young girl is shown in the office of the village doctor, reporting her mother’s illness. The village doctor or Tabib as it said in Farsi (Hassan Tanataei or Dawud Salahuddin, an American born convert to Islam who assassinated an agent of Shah’s regime), examines the patient through a small hole in a curtain that separates them. After taking the history through the child, and examining the patient’s eyes and throat through the hole, the doctor diagnoses that she is starved so for remedy, he gives her a loaf of bread to eat. Then Nafas with her guide arrives at the doctor’s office reporting to be sick and when she slips and speaks a few words in English, the doctor realizes that she is a foreigner. To get her trust, he also discloses to Nafas that he is an American who in the search of God, had traveled to Afghanistan to take part in their struggle for freedom after the fall of the Soviet’s backed communist government. But after the independence, he is caught in between the civil war between the different religious groups for ruling that he finally decides for him God is in helping the injured and sick people by acting as a doctor, even not having any medical education. Indeed it seems that Dawud Salahuddin who played in the film in the role of the doctor or Tabib, was telling his own real life story, in conversion to Islam and escaping after his assassination from US to Iran, for not finding the redemption in Islam for what happened in Iran and Afghanistan after the Islamic conversion of their regimes. 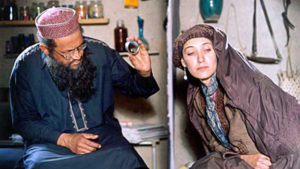 Tabib suggests to Nafas to pay Khak the guide and let him go as he himself could help and take her to the Red Cross who could send her to Kandahar. Arriving at the Red Cross on a horse-cart, two female doctors, one local and one a westerner both surprisingly uncovered, serve men with amputated legs or arms with prostheses. When an airplane flying over drops some legs and arms prostheses attached to parachutes, the men leave the clinic and run to get the supplies. Since Red Cross cannot help Nafas in her journey to Kandahar, the doctor continues with his ride along with her.

On the road they run into a man with a lost arm who joins them on the ride. He wants to sell them the foot prosthesis of his deceased mother that he carries on his shoulder, but Nafas offers to buy it from him if he could take her to Kandahar as the doctor cannot do it due to his situation. Finally the man agrees and takes Nafas along with a group of women who are going for a wedding to Kandahar. At the end of their walking journey among a group of covered women in burqas, Nafas and her guide among some others are kept captive for being suspicious by Taliban guards. The film ends by Nafas recording the end of her journey to her sister that unfortunately she could not reach and rescue her as she is now a victim of the Taliban regime in captivity. 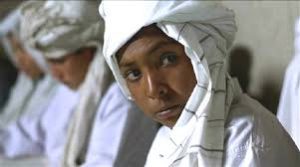 Hailed as “The best film of Cannes 2001” and one of the “All Time 100 Movies” by Time magazine, Kandahar wins the jury prize of the festival, and Frederic Fellini’s honor Unesco award among others. An official selection at the Toronto International Film Festival, the film was hailed by Canadian media as “visually fanciful and politically urgent”, “a powerful piece that should be seen”, and “hope and despair walk together in this masterful film”. Holding 89% positive reviews among 98 at Rotten Tomatoes, Kandahar is described offering “haunting images of a bleak land”. Presenting Afghanistan more than any other filmmakers in the world on the screen, Mohsen Makhmalbaf not only telling the misfortune of Afghans specially their women, but committed to the visual moving art of cinema, he depicts it so elegantly and absorbing to be convincing. In sum, Kandahar is an extraordinary and unforgettable piece of cinema by Mohsen Makhmalbaf who deserves to be among the greatest filmmakers of all time. In closing remarks “Kandahar” one more time will be redefined based on the following criteria: