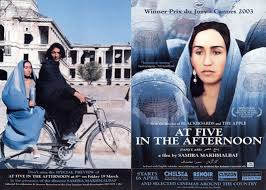 A tribute to the famous poem of the Spanish poet and freedom fighter in the Spain civic war, Federico Garcia Lorca, the film is the creation of Samira Makhmalbaf, the daughter of Mohsen Makhmalbaf at age 23. Acting in her father’s film, “The Cyclist” at age 7, she made her own first feature “The Apple” at age 17 that screened at the Cannes Film Festival in 1998 and later in over 100 other film festivals and more than 30 countries across the globe. Her next feature “Blackboards” two years later in 2000 won the jury prize at the Cannes Film Festival. While her father’s film “Kandahar” was the first major feature about Afghanistan at the time of ruling by Taliban, “At Five in the afternoon” of Samira brought the attention of the world to the still repressed condition in Afghanistan particularly of women. 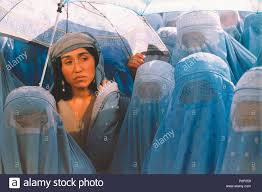 The film opening on two young women carrying water from a well on a desert nearby of their village while in the background a female voice reading part of the Lorca’s poem of “five in the afternoon”. Covered in burqa, the girl “Noghreh” (Agheleh Rezaei) reaching her home, putting down the pales of water, picks up her book and gets on her father’s horse carriage to attend school. Reading her book loud that is Koran on the ride, they pass through Kabul, the capital of Afghanistan, we witness the poor condition of the country even after the American invasion and the fall of Taliban. Reaching the school that is a religious one, Noghreh enters through the front, passes by all the female students covered with burqa unnoticed, exiting through the back door takes out a pair of dress shoes from her bag, puts it on and opens her burqa, so we see her face for the first time. Walking on the road with her uncovered face, an old passing man in surprise and disgust, turns away from her and asks the god forgiveness for her sin. 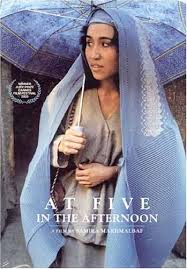 Then Noghreh walks in a regular school where all the girls’ faces like hers are uncovered, while all attend real education by a female teacher. Noghreh explains to the teacher that her father (Abdolgani Yousefzai) does not yet allow her to attend school. The teacher asks the girl students what career they would like to have in the future that many pick to be teachers, engineers and doctors, but when they are asked who would like to be the future president of the country, first nobody dares to say so, then Noghreh and a few others stand up for such career. Afterwards there is a heated discussion among the girls about the possibility and impossibility of a female president in Afghanistan. Majority of the students believe that a woman never could reach such post as their country is not even like Pakistan when Noghreh makes an example of Benazir Bhutto. 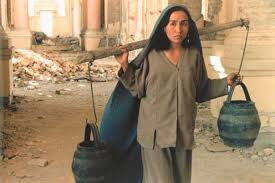 While the film like a documentary discusses the repressed condition in Afghanistan at the 21st century through the dialogues, it is not shortcoming to show the same in beautiful imagery of not only the poverty and oppression in the country, but its striking beautiful landscape and its people in their amazing colorful clothings. After the school and going to collect water from the well again, Noghreh runs into a few trucks unloading a large group of refugees of Afghan women, children and old men who had to flee Pakistan from Taliban. She feels sympathetic and leads them to the ruins around her home to stay in. Hundreds of these refugees lay down around Noghreh’s house and when a family occupies half of the living room of her sister-in-law’s (Laylemo) (Marzieh Amiri) who struggles in survival with her little baby whom she has not enough breast milk to feed, she protests. 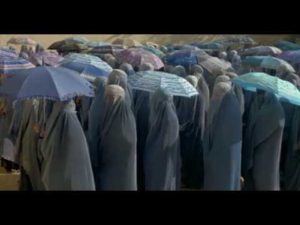 In another scene, Noghreh’s father who is traditional and religious like many others in Afghanistan, protests to another old man who listens to a radio music and calls it a sin, that the old man responds that he is alive for the music. Noghreh’s father who does not like her and his daughter-in-law (Laylemo) to live close to the strange refugees specially men leave the village with them at night. Staying overnight in the wreckage of an airplane close to the airport, Laylemo reveals to Noghreh that her baby may die as she has no milk, or food to feed her. At the same time like a curious journalist, Noghreh keeps asking the refugees who lived in Pakistan about Benazir Bhutto and how good a prime minister she was. Here she meets a young man (Razi Mohebi) who writes poetry and tries to avoid politics. 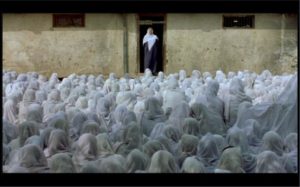 The scene in the ruins of Darul Aman Palace in the vicinity of Kabul, where Noghreh and her father walk in for the search of water when they hear the sound of water dripping is strikingly a visual masterpiece. Her father while walking with his horse who’s also struggling with thirst and hunger in the ruins, apologizes to the animal for not being able to take care of him. Walking out of the palace, Noghreh runs into a white UN soldier from France. She introduces her then asks his name and who’s the president of his country. She is again after the inquiry of finding the qualities of the presidents in different countries with the hope to become the leader of her own one day. The French soldier recommends that she needs to promote herself by advertising that the young poet who has just joined their conversation, suggest her to need photos for her campaign. 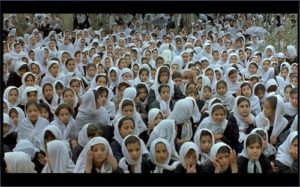 Then carrying Noghreh on the back of his bicycle, the poet takes her to a photographer in a city square for taking her pictures at his own cost. Different poses of Noghreh are taken with smile, serious and angry faces and even covered with burqa. When the photographer mocks against a woman to be the president of Afghanistan, Noghreh walks away in protest. The next day back to the Islamic school, Noghreh notices all the girls are standing up instead of the usual sitting listening to a mourning verse from Koran, when her eyes fall on the photo of a classmate on the wall who has just died, not her or the viewers knowing how. 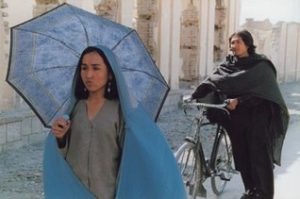 Returning back to the ruined palace, Noghreh has her mourning alone by repeatedly stepping with her dress shoes. Later on carrying water on the shoulders again to the place that is now the family’s residence, she notices her photos that taken the other day, on the walls posted by the young poet. She questions him why he is doing so that he asks if she is not willing to be the president of Afghanistan and prepare her election campaign. While walking away Noghreh talks to herself that she could only deliver speech while alone to herself as she would be anxious and panicky to deliver public speech. The young poet in encouraging her not to lose hope and her dream, tells her that many public speakers including the candidates for presidency first practice their speeches to the animals then in real with people. He continues telling her about himself that he has first read his poems to the cows and other animals then to people. Then he reads some lines of “At five O’clock in the afternoon” from Lorca for her: “…at five in the afternoon. Ah, that fatal five in the afternoon! It was five by all the clocks! It was five in the shade of the afternoon!…” After the poet leaves the palace with his mother on his bicycle, Noghreh continues reading the Lorca Poem that he handed her. 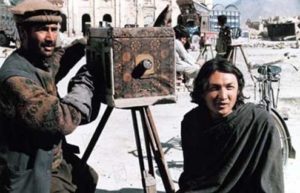 Later on the father who learns his son is dead, and since he cannot disclose his loss to Laylemo, he mourns to his horse who’s out of breath from hunger and thirst. Then the father takes his family of three, Noghreh and Laylemo with her baby in the arms to the desert in search of food and water. Laylemo on the way cries for the fate of her poor baby who is going to die soon, as he has not been moving or crying anymore. In the dark of the night in the desert under the moon while the family sitting by the fire, Laylemo announces to the father and Noghreh that his baby is dead as his body is cold with no movement or breathing. In the morning the bunch continues with their journey while in the sky above, the airplanes and American military helicopters with no notice of them flying over. Despair and awe are seen clearly in the face and eyes of the voyagers walking in their vast land of nothing but war and poverty. 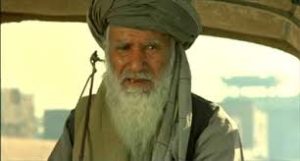 In the following night since the horse is getting weaker and cannot pull them on the cart, they set the wagon on fire that is another beautiful visual scene in the film. Continuing with their journey in the morning, the father holding the baby in his arms, consoles Laylemo that her baby is not dead but sleeping. Soon the group reach another old man, lost in the desert and tells them his story. The father here digs a spot in the desert with a stone to bury the baby, while complains that the God seems to be dead not to help them. The old man responds that animals die, sea dies, but God does not die. The father burying the baby, telling God to take back what he had given them for a while.

The film ends like in the opening in the desert when the family disappear on the slope of a hill, pursuing their hopeless journey into the unseen while we hear Noghreh reading the Lorca’s poem in the background. 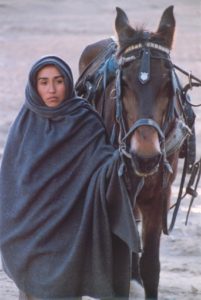 Winning the Jury prize and the prize of the Ecumenical jury at the Cannes Film Festival, Samira Makhmalbaf is one of the few youngest ever to achieve such cinematic excellence. Written the story with his father, Mohsen Makhmalbaf and done its cinematography with Ebrahim Ghafori, Samira directed the film like his father’s works with an emphasis on visual aesthetics. Moreover Samira flavored the film with a poetic style not just in the words of Lorca’s poem versed a few times, but in its overall presentation, set design and location and editing. Once again after his father’s work, “Kandahar”, the nostalgic situation of Afghanistan is depicted on the screen to the world, but this time voicing more the condition of its suppressed female gender through a heroine looking beyond her freedom to dominance her nation. Like the Lorca’s poem that the film borrows its title from, the film is about the voice of a nation against their oppression through beautiful imagery and poetry.

In closing remarks “At Five in the afternoon” one more time will be redefined based on the following criteria: