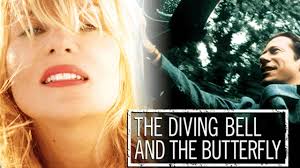 Based on the memoir of Jean-Dominique Bauby (played by Mathiu Amalric), the editor of the French fashion magazine, Elle, who was paralyzed by a rare massive brain stem stroke, called “Locked-in Syndrome”, the film is a non-conventional biopic. The memoir itself published in 1997 received universal acclaim and in the first day of publication sold 25,000 copies and in a week 150,000 and soon became the number one best seller across Europe. Locked in his own body with a totally intact brain, still capable of thinking, imagining, loving, remembering and still communicating by the blink of eyes, both the memoir by Bauby himself and the film adaptation by Julian Schnable is a human heroism to record such an emotional subjective experience that otherwise could not have been appreciated. A Locked-in Journey needed to be told:

Taking laborious hours of work between Bauby and a female transcriber, from the publishing company, building the words letter by letter with the blink of his left eye (as his right eye due to dryness had to be stitched) to write his emotions, memories and regrets of a successful and happy life is an extraordinary rarity. The writing of the book took on average about 2 minutes for each word, and about 200,000 blinks in 10 months of working 4 hours a day, but the man dies from pneumonia two days after the successful publication of his book on March 9, 1997. The depiction of such heroic memoir to pass on to the millions of viewers across the globe to appreciate the life that often is taken for granted is another heroism specially when done masterfully on film.

The most part of the film is shown through the eyes and mind of Bauby as if the camera has been placed in his eyes and brain. The film opens in a hospital at Breck-sur-Mer by the sea when Bauby wakes up three weeks after being in coma from his massive stroke. The surrounding is seen blurry from the patient’s view, but gradually clears up with a better vision. The nurses and the doctor are all excited that Bauby has finally come to life, but he is still totally paralyzed and mute, while can see, hear and think. Slowly Bauby realizes that he is trapped in his own physical body, a rare stroke of the brain stem that the doctors called it “Locked-in-syndrome”. We hear Bauby’s thinking and feelings loud, but no one in the hospital can hear him as he is aphasic and cannot speak.

Soon Bauby is helped by a beautiful speech therapist, Henriette (Anne Consigny) who when she comes in the first time with another beautiful physiotherapist, Bauby thinks he has died and is in heaven. Henriette gradually helps Bauby (she calls him Jean-Do as his friends used to call him) to identify the alphabetical letters by blinking eye to make out words for communication with the outside world. Henriette from the start takes an interest in her patient beyond her job and spends more time with Bauby, hoping his recovery and soon to speak. She even gets upset at him when he is hopeless about his progress. While a laborious process, Bauby accepts and cooperates with the therapy and blinking as the only way of reaching out to his surrounding and others, including Celine (Emmanuelle Seigner), his ex-common law and the mother of his three children who often comes visiting him. Through his mind, Bauby takes the viewer back to his life before the stroke when he was a successful and happy editor of Elle. He shares with us his happy moments and his regrets. Celine despite him leaving her for a younger girl, has remained in love with him and affected in grief by his condition. She is tender, sad, supportive and does all she could do. Soon she brings their three children to visit him in the hospital and even going on outings to the beach and boating. In the search of his imaginations, there’s no limit that his mind and memory takes Bauby and we as viewers follow him in his internal world of fantasy to far places and unrestricted actions. He travels to every corners of the world, makes love with the most beautiful women of his dream, actualizes his childhood dreams, his adulthood ambitions, and takes us from his babyhood to the last day of his normal life.

Finally Bauby decides to write his locked-in experience with the assistance of a female transcriber from a publishing company to make his heroic autobiography a reality. Through many hours and days of laborious work between the two, letter by letter and blink by blink, Bauby transmits the hostage situation of his mind in his body to the world. He perceives himself trapped in a diving bell or suit in the depth of the sea striving to reach up to the surface to the shoreline of his loneliness. In his imagination journey, he travels back in time when the hospital was serving the children with tuberculosis and visits the empress Eugenie, the wife of Napoleon, and the founder of the hospital. He sees himself as a ballet dancer leaping in the air in the hallway of the hospital the young sick children while the empress is watching. In his memory, he goes back to the caring of his old father (Max von Sydow) in his apartment, shaving him and spending time with him weekly. Now the situation has reversed and the father in in worry grief of his son’s helpless condition, trapped in his apartment and not willing to face the reality of his son’s paralysis. The father calls him on the phone, but since the communication letter by letter through Henriette is unbearable for the father who finally hangs up in tears. After a year in hospital with not much progress in his condition and when his book is in the process of publication, Bauby catches pneumonia. In this state of the end, he travels again in his imagination and dream, going home to Celine and their children in his new convertible car. Then he takes his son for a ride, having a close and personal communication with him, when suddenly he feels hot, having difficulty breathing and unable to drive and stops he car. His son frightened, runs out to a nearby house on the road and when returns with a woman, we see the father in his present condition of paralysis. Back in the hospital and in real time, Bauby’s vision is again blurry and while Celine shows him a copy of his published book that has been received with great reviews, Jean-Do leaves us all for the afterlife. The film ends with the ice glacier that in the opening was breaking down, now shooting up. In closing remarks “The Diving Bell and the Butterfly” one more time will be redefined based on the following criteria: