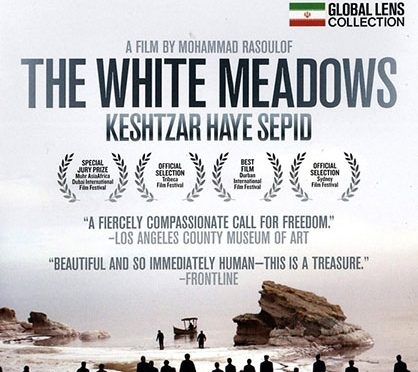 On the verge of the fall of cinema as an art medium, “The White Meadows” written, produced and directed by Mohamad Rasoulof from Iran is like resuscitating a dead body and bring it all to life. This fictional surreal, existential and philosophical film poetically probes into the superstitious beliefs and rituals of ordinary people of a few villages on the skirt of a salt lake in Iran. This metaphoric critic of superstitions and religious rigidity still existing at the dawn of the new millennium costs Rasoulof and his editor, Jafar Panahi sentence to 6 years in prison by the Islamic government of Iran, a year after the release of the film. Although a year later in 2011 their appeal concluded in the release of Panahi, but Rasoulof’s sentence was reduced to one year in prison for propaganda against the Islamic regime. 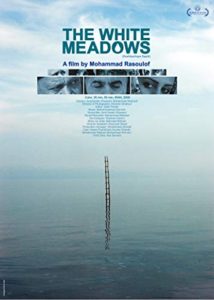 This masterpiece elegantly uncovers bare to the bones the still existing superstitions and religious rigidity at the cost of lives in a remote region of Iran that is an example of many such regions in the world. A perfect look-alike mélange of surrealistic, existentialistic, and poetic works of the masters of cinema such as Bunuel, Bergman, Antonioni and Fellini, Rasoulof stands alone pure and original in a novel piece of cinematic art. With its superb story design, beautiful and poetic cinematography by Ebrahim Ghafori and matched music score by Mohammad Reza Darvishi, the film is what the true believers of cinema as an art medium had been waiting for in a long time. 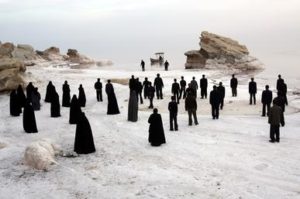 The film opens in close up on an old man, Rahmat (Hassan Pourshirazi) cleaning a few small glass jars that we learn later to be used for collecting the tears of mourners. Rahmat after walking in a long white landscape of salt field (White Meadows) reaches to his boat docking by the salt lake and paddles for his destination to a village on the other side to collect the tears of the mourners of a recently deceased young woman. After hearing from the locals of the beauty, youth and premature death of the girl and collecting the tears of the mourners, the man loads the corpse on his boat and departs to the other side of the lake to bury her as that salt island has no cemetery.

Midway on the lake, the man opens the sheet over the corpse to confirm the beauty of the girl, but jumps in a shock to see a young alive boy, Nasim (Younes Ghazali) under the sheath. Upset of the trick, he throws the boy in the water but later rescues him as the boy could not swim. Nasim explains that he has replaced himself with the corpse of the girl to get out of the village in the search of his father who had left them years ago. Rahmat finally agrees to take the boy along only if he acts as a mute and deaf, so others not to discover his means. The two arrive to the other side of the lake where in the first scene a blind man picking up the dead bodies of many black birds that have died for drinking the salty water of the lake. 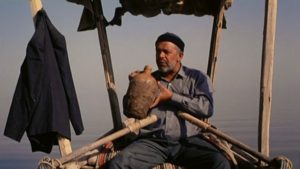 Rahmat arrives at a house to ask the permission of an old lady who seems to be the eldest of the village for the collection of the locals’ tears. He is told by the lady to ask people not to sin as the lake water has never been so salty and the fairy has not been out of the well in a long time to make the water sweet due to their sins. She continues saying that the meadows have been white for the salt and if people stop their sins, the fields change back to the green and blooming. In the next scene, the villagers have lined up to enter a room to tell their pains and sorrows inside small jars while Rahmat collecting their tears in his blue jar. When all the pray jars were collected, a man was chosen to carry the jars into a well to the fairy. He was bathed and shaved for the preparation of the mission, while being told to go as far down as possible to reach the fairy. The man who seems to be mentally challenged cries that what would happen to his newly wed bride if he cannot climb up after having done his task. But he must do the mission on the behalf of the whole village and after farewell with his wife, he is pushed down on a rope while the villagers asking him loud to keep going down. After a while just before the sunrise, the rope is pulled up and the people shout at him to climb up, but the rope breaks and the man falls back in the well and dies. 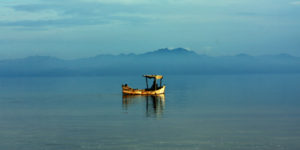 In the next scene Rahmat and Nasim are seen back on the boat leaving the village. While Rahmat sleeping and Nasim is paddling, in a moment he sneaks out into Rahmat’s bag steals some of the tears out of his jar and pours it into his own bottle. Arriving at the next village to collect the tears of a young bride, who we learn later to our surprise that she is not going to be the bride of a man, but a bride for salt lake as a sacrifice so its water turns sweet. In a most beautiful and poetic scene where the sea is covered with many burning oil lamps, the bride on a bed is placed on the lake and pushed away. One by one the villagers certify in shouting to the lake that the girl has been the most beautiful virgin of their village who has never loved any man but the sea and she has volunteered to the task so the sky having mercy on the people and rains and make the sea water sweet. In the next scene the villagers find out about Nasim’s stealing their tears and tie him to a post and stone him, but Rahmat stops them, releases him and takes him back on his boat and they both leave the village. In the next village where the two arrive, a man announces to a group of attendees in a room that he has a 1000 faces man behind a curtain that changes his face to make them laugh and forget their sorrows. Then after collecting people’s sorrow in a bag, the showman opens the curtain and a monkey jumps out that makes people laugh. The showman asks the monkey if she would be willing to wed to any man in the village that she nods to decline and makes people laugh again. 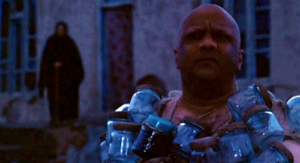 In the next scene a man dipped deep in the salt with only his head out, is pulled out and forced to climb up a ladder in the lake. He is asked to look up to the sun, but he cries out that he cannot as his eyes are burning from the salt and the sun. When he is pulled down the ladder, he is asked what color is the sea and if he says blue, he would set free. But the man cannot see and does not want to lie and pretend having seen the sea blue, so he’s sent out of the village with Rahmat to a prison island. When Rahmat with the victim and Nasim arrive at the prison island, an old prison guard begs Rahmat to stay at least one night with him as he is very lonely. After having dinner together, and the guard cries to him out of his sorrow, Rahmat collects his tears and in the morning he takes him on his boat with him and leave the prison island, while the body of Nasim body seemingly dead lying on a raft is carried behind. In the middle of the lake, the corpse of Nasim is tied to two heavy cylinders and dropped in the sea with two wooden tops come to the surface. The camera now shows many of such wooden tops floating around on the lake as signs of many bodies being buried in the water.

In the last destination village, Rahmat arrives in a room where an old paraplegic man on a wheelchair is brought in by a young woman. Rahmat cleans a wound on his leg then rinses it with the tears collected in his jar. Then when his work done and the paraplegic man carried out of the room , he pours back the rest of the tears in his jar. In the last scene of the film Rahmat is sitting by the lake with the jar of tears in his hand that finally he pours it into the lake and the film ends. 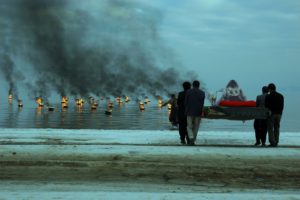 Hailed only by a few critics globally as a film treasure, humane, a critique of humans’ irrationality and fallibility, a magic-realison rich in allegory and symbolism beyond the Iranian new wave cinema of neo-realism, the film won only a few international awards such as Jury Prize for Best Feature at Dubai International Film Festival and Denver Film Festival. Above all Rasoulof is brave enough to risk his own life and probe deep into the flesh of superstitions underlying religious beliefs and conventions in supernatural powers (e.g. fairy), prays and tears. Disclosing all these beautifully like a painter, poet or philosopher, Rasoulof with the assistance of his cinematographer Ghafori and his composer Darvishi, takes his message across the oceans to the rest of the world and proves that cinema could be still rejuvenated. 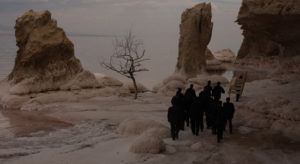 In closing remarks “The White Meadows” one more time will be redefined based on the following criteria: